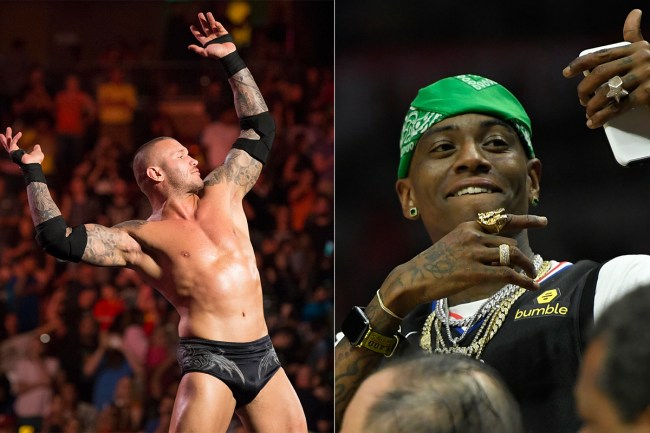 Earlier this month, Soulja Boy and Randy Orton got into a war of words on Twitter after the rapper called wrestling “fake.”

The exchange was entertaining and cooled off until Soulja Boy once again took a shot at the former WWE Champion. The “Crank That” singer called Orton a b*tch and the P-word and means it 100%.

You a bitch @RandyOrton and I mean that 💯 pussy

Randy Orton fired back and went straight for the throat.

“My dick taller then you. Weighs more too. Go to bed you f*cking infant. You’re welcome for the boost. Go choke on a keyboard.”

My dick taller then you. Weighs more too. Go to bed you fucking infant. You’re welcome for the boost. Go choke on a keyboard. https://t.co/CQUn6WHpGa

Those are some Fiend-level sick burns. Soulja Boy tried to save face but his comeback was as weak as his last few tracks.

Bro you wear thongs. Leather thongs at that. Stop the cap 🧢 my money taller than you. To be real I think you scared of me. All that talk I’ll smack the shit out u 👋🏾 https://t.co/Rr7Nua2Nj8

Bad Bunny is wrestling at WrestleMania 37, and Logan Paul is likely to appear, so will Soulja Boy be the next celebrity showing up at the two-night event?

WWE WrestleMania 37 goes down on Saturday, April 10, and Sunday, April 11 at Raymond James Stadium in Tampa.