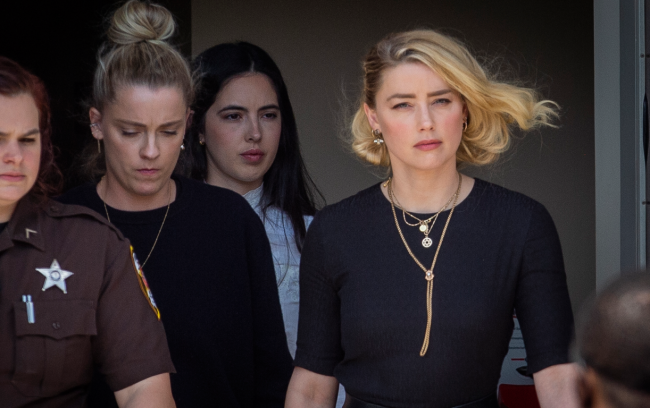 Amber Heard gave her first public interview to NBC’s Savannah Guthrie on the Today show this week and reiterated that every word of her testimony in her defamation trial against ex-husband Johnny Depp was the truth.

On Monday, a portion of the interview was released in which Heard stated that she doesn’t blame the jury for siding with Johnny Depp in the trial, but that the jury (which was not sequestered) was swayed by poor public relations and negative social media.

On Tuesday, the full interview with Amber Heard was aired on the Today show. In it, she claimed, “To my dying day, I will stand by every word of my testimony.”

Heard also stated, “As I testified on the stand about this, is that when your life is at risk, not only will you take the blame for things that you shouldn’t take the blame for. But when you’re in an abusive dynamic, psychologically, emotionally and physically, you don’t have the resources that, say, you or I do, with the luxury of saying, ‘Hey, this is black and white.’ Because it’s anything but when you’re living in it.”

She doesn’t blame the jury for siding with Depp, telling Guthrie, “I don’t blame them. I actually understand. He’s a beloved character and people feel they know him. He’s a fantastic actor.”

Heard continued, “I’ll put it this way, how could they make a judgment? How could they not come to that conclusion? They had sat in those seats and they had heard over three weeks of nonstop, relentless testimony from paid employees, and towards the end of the trial, randos, as I say.”

While she still claims Johnny Depp lied on the stand about hitting her, she also admitted that she too was at fault.

“I did do and say horrible, regrettable things throughout my relationship. I behaved in horrible, almost unrecognizable to myself ways,” Heard admitted while also claiming that she never “instigated” the violence. “It was very, very toxic. We were awful to each other.”

She continued, “I have so much regret. I freely and hopefully and voluntarily talked about what I did. I talked about the horrible language. I talked about being pushed to the extent where I didn’t even know the difference between right and wrong.”

A lawyer for Heard claimed after the verdict that she “absolutely” cannot afford to pay the $8.35 million judgement against her and that they plan to appeal the ruling.

Lady, none of this would’ve happened if you hadn’t lied. Stop blaming everybody else for the problem you created.

And how on earth does she think JD has been feeling for the last 6 years, during the UK trial and this trial, knowing SHE was the abuser not him but everyone treating him like the devil incarnate! Please get her the psychological help she desperately needs.

"Says the lawyer for the man who convinced the world he had scissors for fingers?” Because the general viewing public was so dazzled they couldn’t tell that the scissor hands were movie magic and thought it was real 🤨 What kind of argument is that!? Fire your PR team AGAIN.