A Real ‘Squid Game’ Is Being Set Up In Abu Dhabi (Minus The Death — We Think?) 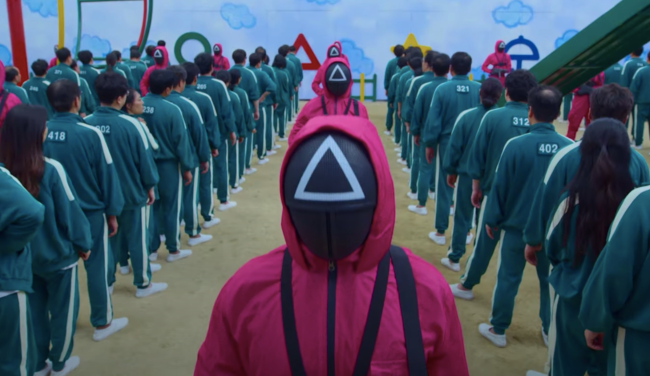 Over the weekend, I finally — FINALLY — wrapped up Squid Game. While I can’t say it’s the greatest show I’ve ever seen, I absolutely understand why it’s turned into such a global phenomenon, as its combination of a heady yet harrowing concept, efficient plotting, and emotional characterization creates a highly enjoyable concoction of watchability. In short, Squid Game has mastered and virtually weaponized the “just one more episode” phenomenon.

As a result of that remarkable watchability, Squid Game is hitting unprecedented levels of popularity, as evidenced by this graph that charts the search volume of various hit TV series from the last few years. As you can see, Squid Game is quite literally dwarfing other massively viral and trendy hits such as The Crown, Tiger King, and The Mandalorian.

As a result of this mind-boggling popularity, Squid Game is currently breaking through to mainstream culture in all sorts of ways — for example, sales of white slip-on Vans have increased by over 7000%, while an actual “Squid Game” is set to take place at the Korean Cultural Center in the United Arab Emirates.

The Korean Cultural Center in the United Arab Emirates is organizing a re-enactment of the games seen in the Netflix series for two teams of 15 participants. The event is slated to be held this Tuesday, October 12, in two sessions at the Center’s Abu Dhabi office.

According to the Center’s event page, four out of the six games seen in the Netflix series will be played during the event. These include the “Red Light Green Light” and “Dalgona Candy” challenges, both of which spawned trends on TikTok. Players will also get to try their hand at the “Marbles” and “Ddakji” (paper-flipping) games, also seen in the series. [via Insider]

As for the prizes, while participants, unfortunately, won’t be taking home millions of dollars, each winner will receive a customized green tracksuit.

RELATED: The ‘Squid Game’ Closed Captions Are Apparently Mistranslated And Are Therefore Changing The Show