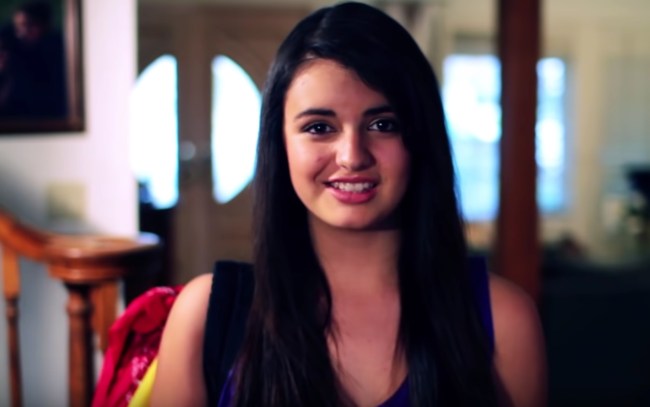 I simply cannot wrap my mind around the fact that it’s been nine years since Rebecca Black‘s ‘Friday’ burst onto the scene. If my memory serves me correctly, it was a music video made in the mall or something like that. A quasi-expensive high-production-value music video that just exploded onto the Internet and into pop culture.

Rebecca Black was just a teenager at the time, 13 to be exact. The video on YouTube has amassed over 139 MILLION views (139,749706 views since it was uploaded in 2011). It was the very definition of an earworm. Once you hear ‘Friday’ you could never get it out of your head.

Side note: my colleague Matt claims to have NEVER heard this song until now. I think he’s full of shit but he seems genuine in his surprise at the song’s lyrics. Here’s the video for ‘Friday’ if anyone out there needs a refresher:

So, Rebecca Black’s resurfaced on Twitter after all these years and she’s shared some vulnerable thoughts on bullying along with a picture of what she looks like now. Suffice it to say, she looks quite different. I wouldn’t recognize her on the street but I would take notice because she’s a straight-up gorgeous woman these days.

9 years ago today a music video for a song called “friday” was uploaded to the internet. above all things, i just wish i could go back and talk to my 13 year old self who was terribly ashamed of herself and afraid of the world. to my 15 year old self who felt like she had nobody to talk to about the depression she faced. to my 17 year old self who would get to school only to get food thrown at her and her friends. to my 19 year old self who had almost every producer/songwriter tell me they’d never work with me. hell, to myself a few days ago who felt disgusting when she looked in the mirror! i’m trying to remind myself more and more that every day is a new opportunity to shift your reality and lift your spirit. you are not defined by any one choice or thing. time heals and nothing is finite. it’s a process that’s never too late to begin. and so, here we go! this might be a weird thing to post but the honesty feels good if nothing else.

Again, this is not the Rebecca Black I remember from yesteryear. The past nine years have been much kinder to Rebecca Black than they’ve been to me.

A lot of people on Twitter responded to Rebecca Black’s message about bullying with words of support and she seemed overwhelmed by the positive response she got from fans:

okay so i just got back on twitter and i am just so blown away and confused and grateful at the messages you guys have been sending to me in response to this. i could have never imagined support like this. that you a million times i just wanna cry!! (happily!!!) https://t.co/SOxFLJhjD9

thinking about rebecca Black's Friday and…..people really bullied a middle schooler over that

I remember being one of the kids in high school who laughed at the song and made bad jokes she didn't deserve.

Today, Rebecca Black is blatantly strong, her singing is PHENOMINAL, and I renounce any shitty joke my dumb younger self ever made about her. She deserves to be proud. https://t.co/Jxv2QhdIBs

Nice to see Rebecca Black getting a reevaluation, that girl never deserved the shit thrown at her.

Honestly, Rebecca Black and attitudes toward "Friday" are a sign of positive change on the internet. Its original release was pretty much universal mockery and derision. Today, people are more considerate and empathetic.

Useful to remember within all the awful these days.

There are also A LOT of people on Twitter willing to admit they were part of the bullying problem back when Rebecca Black’s ‘Friday’ hit the internet. It’s easy for people to get caught up in the moment with these viral meme sensations and forget that there’s a vulnerable person at the center of it all and frankly it’s astonishing that Rebecca appears to have emerged on the other side as a level-headed adult. Big ups to her for staying strong through her formative years.