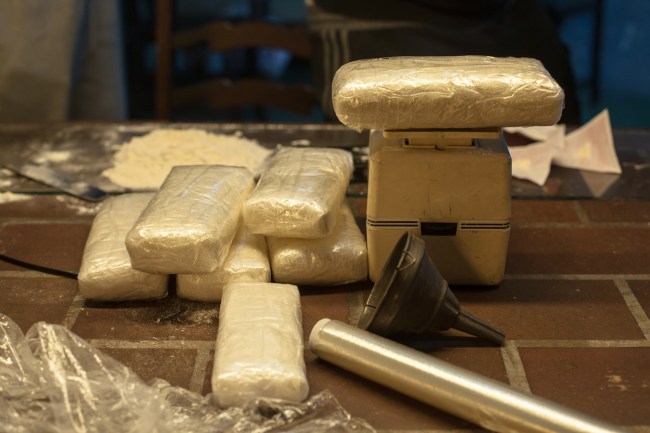 Federal authorities seized a shipping container full of cocaine yesterday in Philadelphia and it’s the single largest drug seizure in that part of America. The Feds seized an almost unfathomable amount of cocaine at the Packer Marine Terminal in Philadelphia, 16.5 TONS.

That’s ~14,968,553 grams for anyone keep track on the streets, and that’s *PURE* cocaine before it’s had a chance to be cut and diluted with things like baby laxatives to make it less potent and allow dealers to sell it in larger quantities than the roughly 15 million grams.

News of this record-bust, the largest in the history of the Eastern District of Pennsylvania, broke yesterday afternoon. The ship was sailing under a Guyana flag. Its previous ports of call were The Bahamas, Panama, Peru, aaaaaaand Colombia. Interestingly, the ship was destined for Europe.

*BREAKING NEWS* Federal authorities have seized approximately 16.5 TONS of cocaine from a large ship at the Packer Marine Terminal in Philadelphia. This is the largest drug seizure in the history of the Eastern District of Pennsylvania. @ICEgov @CBPMidAtlantic @PhillyPolice @USCG

*BREAKING NEWS* Members of the ship’s crew have been arrested and federally charged, and the investigation is on-going. @ICEgov @CBPMidAtlantic @PhillyPolice @USCG https://t.co/sSkGBZXJGT

According to this report, the ship was headed from Chile to Europe with stops all throughout The Americas. They found the coke spread out across eight shipping containers. This is a major hit for hte likes of Las Vegas and The Hamptons, the latter will be noticeably tame this 4th of July if they can’t get their fix of Colombia’s Finest™.

An official said the ship, the MSC Gayane, was headed from Chile to Europe when the drugs were found in Philadelphia. The cocaine was discovered inside eight containers from a cargo ship, sources tell Action News. https://t.co/zoIGtOfPzo https://t.co/3XTQLOdPLG

An estimated $1B worth of cocaine seized from ship at Philadelphia port. 15 tonnes of the drug were in 7 shipping containers. The ship, the MSC Gayane, is Liberian-flagged; its last ports of call were Bahamas, Panama, Peru and Colombia.

The report of this bust sounds like a spec script written for a Hollywood blockbuster film starring Leonardo DiCaprio as a crooked Philly drug cop (via WTVM):

Agents with dogs swarmed the colossal ship Tuesday afternoon, including one officer who could be seen climbing into the back of a large red container on wheels. Court documents said the bust began Monday.
An affidavit alleged that crew members helped load the cocaine onto the MSC Gayane while it was at sea off the west coast of South America. Citing an interview with one of the crew members, authorities said a total of 14 boats approached the vessel on two separate occasions during its voyage. Several crew members allegedly helped transfer bales of cocaine.

The ship’s second mate, Ivan Durasevic, and another crew member, Fonofaavae Tiasage, were charged with conspiracy to possess cocaine aboard a ship. An online court docket did not list attorneys for the defendants. It wasn’t clear whether other crew members would face charges.
The drug seizure is the latest in a series of large cocaine busts along the East Coast. In a March bust in Philadelphia, drug dogs sniffed out 1,185 pounds of cocaine worth about $38 million — at that time the city’s largest seizure of the drug in more than two decades. (via WTVM)

Here’s the ship that brought it in:

The cargo ship that brought in tons of cocaine into the Port of Philadelphia yesterday.. Federal agents are still going in and out of the ship. @nbcphiladelphia pic.twitter.com/fpwAQ20yIk

I might be crazy but the vibes I’m getting from this drug dog are ‘holy shit, I did it! I found ALL of the drugs!’

I'm not a drug dog expert but I believe this is the dog signaling "THERES A LOT OF COCAINE IN THERE" https://t.co/zbbc3ndGed pic.twitter.com/9x9xD9YJ18

HISTORIC DRUG BUST: About 16.5 tons of cocaine, with a street value of over $1 billion, has been seized at Philly's Packer Avenue Marine Terminal. More info ➡ https://t.co/zoIGtOfPzo pic.twitter.com/8I2Cc7lTKo

That’s 33,000 POUNDS of cocaine for anyone getting lost in the term ‘tons’, which is easy to do. With a number that large it’s hard to conceive of just how much cocaine that is when people tend to know the drug in much smaller quantities. In movies, when people are doing blow you only ever see a gram at a time broken up into lines…Multiply that by nearly 15 million and that’s how much was found, and that’s before the drugs were cut and diluted.

Thinking back, it’s probably a great thing that dog didn’t get into the stash. We wouldn’t want a situation like that cocaine bear from the 1980s.