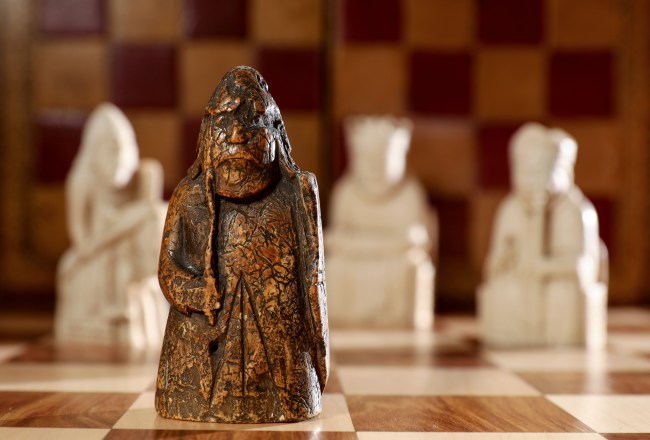 Every time I see a story like this I want to crawl into my parent’s attic and start looking through all of the old family relics to see if there’s anything that looks like it’s worth throwing away because chances are that item is worth a fortune, or that’s at least what I’ve been led to believe after years of watching Antique’s Roadshow clips online and reading stories like this one.

This family bought this old chess piece for £5 in 1964 which is probably somewhere around $40 in today’s dollars after you adjust for inflation. That’s a lot to spend on a single chess piece but this one was eye-catching. It’s so eye-catching that the set this piece is part of was actually the inspiration for ‘Wizard’s Chess’ in Harry Potter and the Sorcerer’s Stone.

It turns out this ‘missing’ pieces purchased for £5 in 1964 is 1 of 5 missing pieces from the lost Lewis Chessmen. The Lewis Chessmen are made from walrus ivory and the incomplete set(s) are on display at the British Museum and the National Museum of Scotland in Edinburgh where they are huge draws for museumgoers.

These Lewis Chessmen were found on the Isle of Lewis in 1831 and are symbols of European civilization according to the BBC. They date back to the 12th century. The family brought this piece in for appraisal and the appraiser almost dookied in his pantaloons upon realizing what it was:

The Edinburgh family’s grandfather, an antiques dealer, had bought the chess piece for £5 in 1964.
He had no idea of the significance of the 8.8cm piece (3.5in), made from walrus ivory, which he passed down to his family.
They have looked after it for 55 years without realising its importance, before taking it to Sotheby’s auction house in London.

Sotheby’s expert Alexander Kader, who examined the piece for the family, said his “jaw dropped” when he realised what they had in their possession.
“They brought it in for assessment,” he said. “That happens every day. Our doors are open for free valuations.
“We get called down to the counter and have no idea what we are going to see. More often than not, it’s not worth very much.
“I said, ‘Oh my goodness, it’s one of the Lewis Chessmen’.”
Mr Kader, Sotheby’s co-worldwide head of European sculpture and works of art, said the family, who want to remain anonymous, were “quite amazed”.
“It’s a little bit bashed up. It has lost its left eye. But that kind of weather-beaten, weary warrior added to its charm,” he said. (via BBC)

How much would you pay for this Lewis chess piece? ♜♖

This ‘beat up’ old ivory chesspiece will now hit the Sotheby’s auction block where it’s expected to fetch more than $1 million…For a chess piece…purchased for five pounds back in the 1960s…that sat and collected dust for decades.

Bloody hell! An old chess piece sitting in someone's draw turns out to be one of the missing Lewis Chessmen (12th-century Norse chess pieces made from walrus tusk) https://t.co/5oni5up34b pic.twitter.com/zjg5ARtmyE

It’s just blowing my mind that A SINGLE PIECE from this 12th-century chess set made out of walrus tusk ivory can fetch over a million dollars. Does the museum purchase it with their endowment to get closer to the full set? Does a wealthy benefactor purchase it and donate it to the museum as a tax write-off so they don’t have to pay taxes for several years?

I just cannot fathom anyone anywhere spending a million bucks on a single chess piece regardless of the historical importance.