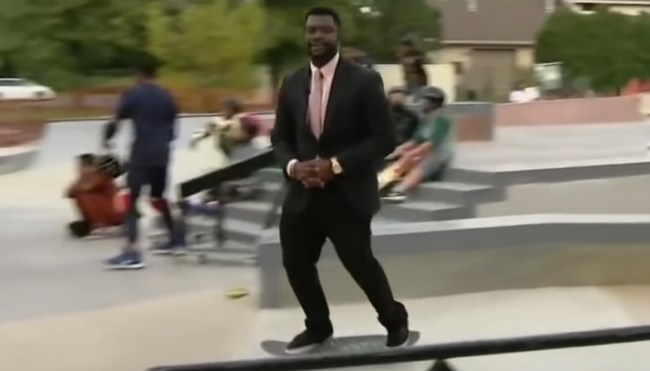 For the most part, local news is rarely described as “electric television. However, every once in a while, a segment comes along that manages to seriously spice up a half-hour of television built on a foundation of drama over zoning regulations, cutesy human interest stories, and the traffic reports that somehow still exist in 2021.

If you spend a fair amount of time online, there’s a good chance you’ve stumbled across one of the viral videos featuring Charlie LeDuff. The Pulitzer Prize winner was at the center of a number of memorable investigative pieces he helped orchestrate during his time at Detroit’s Fox 2, including one where he ate cat food while exposing subpar meals served by Meals on Wheels and another where he attempted to squat inside a house that was already occupied by a squatter.

LeDuff has since moved on to other ventures, but it looks like Detroit has a new Cool Reporter in town in the form of WDIV‘s Victor Williams.

Earlier this week, Williams took a trip to the nearly finished Chandler Skatepark to chat with an awesome dude known as “Mr. Premium” who’s giving free skateboarding lessons to kids while instilling them with some life lessons in the process.

However, Williams was undoubtedly the true star of the segment, as he wrapped it up by hopping on a skateboard in a suit and tie and effortlessly pulling off a few tricks while delivering his closing lines on live television.

That rad decision blew the mind of one of the anchors in the studio, who exclaimed “He’s so cool!” while watching him shred.

I think that sums it up pretty well.