CELEBRATE! ‘Rick And Morty’ Are Coming Back With A Whopping 70 Episodes! Wubba Lubba Dub Dub! 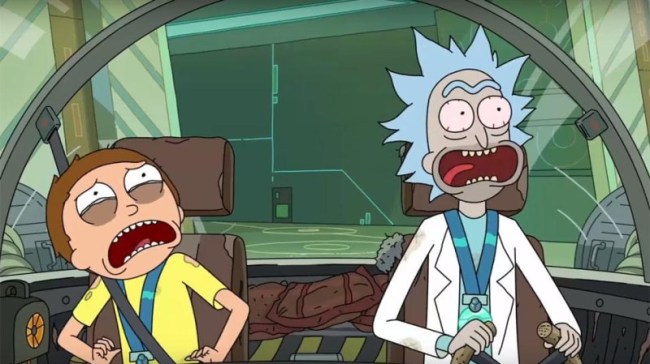 Rick and Morty are coming back! And the new deal with Adult Swim means you will get a shit-ton of new R&M for years to come. On Thursday, the co-creators of Rick and Morty announced the exciting news on social media about their new contract that includes 70 new episodes! SEVENTY! SETENTA! That means SEVEN new seasons of exploring the Rickstaverse!

Two months ago, things looked grim when Rick and Morty co-creator Dan Harmon announced that negotiations with the Cartoon Network were not going well. But on Thursday, Harmon had a much different outlook as he proudly announced that he had to get back to work to make new episodes of the multriverse-traveling alcoholic scientist and his grandson. Harmon announced the joyous news with a sudsy Instagram post as he was joined by his partner in crime.

Rick and Morty co-creator and fellow shower enthusiast Justin Roiland announced that the dynamic duo are signed on to make 70 new episodes of the hit Adult Swim animated show.

More Rick and Morty coming. Looking forward to all the tweets asking where it is! #theydrawingit pic.twitter.com/KZild3B9rP

Adult Swim released a statement about the renewal.

Adult Swim has made a long-term overall deal with the creators that will include 70 new episodes of the critically acclaimed series that follows a sociopathic genius scientist who drags his inherently timid grandson on insanely dangerous adventures across the universe.

Rick and Morty debuted in 2013 and there have been 31 episodes in the first three seasons. While we don’t know when Season 4 will happen (maybe late 2019?), we do know that Rick and Marty are coming back and that’s enough for many to scream “Wubba Lubba Dub Dub!” from the rooftops. But maybe noone was more excited about the boatloads of new Rick and Morty more than T-Pain.