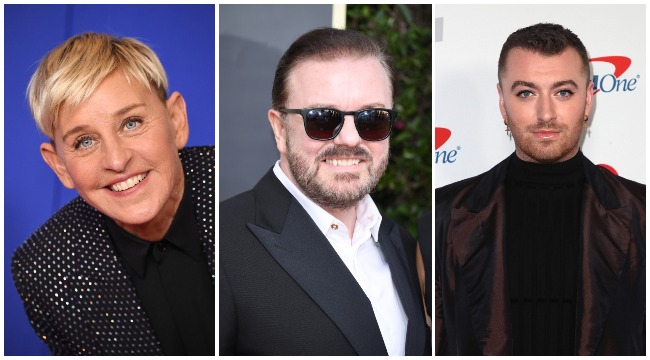 Do you know how the real victims are of this global crisis? The real unsung heroes?

You: “The medical professionals who are risking their lives and working obscene hours to fight a highly-contagious disease of which there is no cure?”

Eh, obvi a huge thanks to them, but dig a little deeper.

You: “The essential workers who are delivering food, bagging groceries, and manufacturing products under the most stressful of circumstances?”

Not quite, we’d be good with just sending them an Edible Arrangements or something.

Give up? The real heroes of the pandemic are the celebrities who have been unjustly forced into the confines of their 25,000-square foot homes with their personal chefs and indoor pools.

Like Ellen DeGeneres, for example, who last week caused a stir when

“One thing that I’ve learned from being in quarantine is that people – this is like being in jail, is what it is,” she said.

Ellen Degeneres really said social distancing is like being in jail when the government is out here sacrificing fast food workers who don’t even have that privilege 🤡 she probably hasn’t even discovered half of the rooms in her $27M mansion… pic.twitter.com/3l19ZI3Y7l

Or Sam Smith, who recently broke down in tears on Instagram from self-isolation in a $12 million home. Or Gordon Ramsey claiming quarantining in his mansion was ‘a living nightmare.’

Ricky Gervais is richer than 99% of people will ever be, but at least he hasn’t lost the plot.

The comedian told The Sun:

‘[NHS staff] are doing 14-hour shifts and not complaining. Wearing masks, and being left with sores, after risking their own health and their families’ health selflessly.

‘But then I see someone complaining about being in a mansion with a swimming pool. And, you know, honestly, I just don’t want to hear it.’

He then added with a chuckle: ‘I didn’t go out much anyway, and there’s always too much booze in the house. It’s always been the 6pm watershed for as long as I remember. Obviously, I am looking at the watch.’

This seems like a good time to re-visit this piece of art.