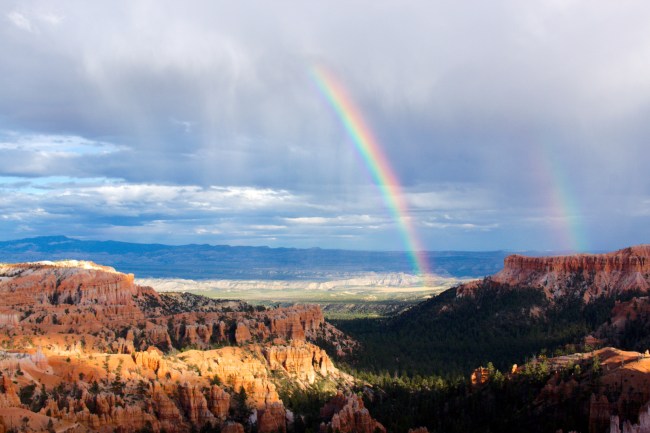 This is a major bummer. Early viral video sensation Double Rainbow Guy is dead at 57.

According to reports from the Mariposa County Coroner’s Office, Mr. Paul Vasquez  – aka Double Rainbow Guy aka Yosemitebear – died on Saturday afternoon in the emergency room of John C. Fremont Hospital.

On May 3rd, Vasquez – posted on Facebook that he was experiencing health issues:

“I thought I might be having a heart attack today but I’ve vowed never again to go to an ER or hospital so I just rode it out. It took me several minutes to catch my breath after walking 50 feet, I went to the farm feeling weak, did what I needed to do came home and took a nap.”

My lungs are feeling congested, I’m suspecting pollen, after my nap I tested my oxygen level, it’s under 80, I have a fever of 100.2 I’m having a little trouble breathing if I walk in my apartment but it’s not to bad if I’m not moving. I signed up to make an appointment to get a Covid 19 test here in Mariposa on Tuesday.

Please don’t give me any advice, or sympathy I don’t want it. I seriously doubt that I have the virus because I’ve been pretty careful but who knows right? Like I said I am never stepping into another ER or hospital again, that’s where people go to die, I don’t want to die in a hospital hearing beeps, alarms, getting poked and woken up, hell no!

Whatever happens I’m ready for it, I’m happy to experience it all, it might only be pollen and I’ll have more time in my apartment, if it’s the virus and it’s my time to recycle I look forward to coming back to a new body and starting over, whatever happens I’m enjoying the ride.”

Godspeed to an Internet legend. When CNN caught up with him a couple years ago for a “where are they now?” segment, he said, breathlessly, “You can’t look at a rainbow anymore and not think about me. That’s just the way it is.”

Ain’t the that truth.

2010 was a much simpler time on the Internet. OK Go made Rube Goldberg machines and all it took to go viral was getting wasted at Coachella and tripping over your flip flop. Lebron James’ The Decision was arguably the biggest cultural event of the year, where he said career-defining words that live in infamy: “I’m taking my talents to South Beach.”

2010 was the year this very website you’re reading started to gain a little traction curating those fun moments.

“Double Rainbow Guy” was an important thread in the digital tapestry of that era.

In the summer of the summer of 2010, Paul L. Vasquez went mega-viral with his downright euphoric description of a double-rainbow sighting from his home in Yosemite National Park. The video was uploaded to YouTube in January of that year, but back in those days it took a little while for the algorithm to work its magic.

Jimmy Kimmel then discovered the video, kicked it to a huge national audience, and the rest is history.

“It’s a double rainbow all the way across the sky!” – Vasquez declared. “It’s so bright!”

The video was peppered with fun, stoner bliss.

He laughed. He cried.

It is the perfect viral video – a roller coaster of real and raw human emotion.

It’s the Terrapin Station of viral videos. Innocent and pure, not performative and over-produced. Totally organic.

There was no agenda to it other than documenting human awe and joy of the natural world.

Over 46 million people watched Yosemitebear’s reaction, though honestly that number is probably at least 10x bigger. Tosh.0 did a segment on him, and he co-starred in a Smartwater commercial with Jennifer Aniston. Jimmy Fallon memed him as Neil Young.

The Modesto Bee notes that Vasquez worked an LA County firefighter before heading north in 1985 to Yosemite, where he worked as a park security officer, emergency medical technician, and a firefighter. He lived in the Sierras in a mobile home in the mountains, about 10 miles from Yosemite, and worked National Park Service. He also went through a stint training to be an MMA fighter, but only lasted one fight (he lost).

He was a true Edward Abbey for the digital era:

“I’ve lived on the side of this mountain alone for decades. When you live alone, you connect with nature on a deeper level. You can yell at the top of your lungs and no one cares or knows. It gives you a type of freedom that most people have no understanding of.”

Enjoy the other side of the rainbow.