Disney Tries To Deny The Existence Of Sex, Characterizes Climatic ‘Rise of Skywalker’ Moment As ‘Not Romantic’

When people joke about the pussification of America, this is exactly the type of shit they’re talking about.

Yesterday, I brought you the news that the soon-to-be-released novelization of Star Wars: The Rise of Skywalker attempts to retroactively explain Emperor Palpatine’s preposterous return by clarifying that he was a clone. As I noted in the original article, having to deliver key plot points through a piece of supplemental content released months after the film itself is about as haphazard as it gets when it comes to storytelling.

Unfortunately for all of us, though, Disney recontextualization of the film didn’t stop there, as the upcoming The Rise of Skywalker novelization also further “clarifies” the climactic kiss between Kylo Ren and Rey Palpatine, claiming that the moment was, in fact, not romantic but rather a moment of gratitude.

“His heart was full as Rey reached for his face, let her fingers linger against his cheek. And then, wonder of wonders, she leaned forward and kissed him. A kiss of gratitude, acknowledgment of their connection, celebration that they’d found each other at last. But then she drew back, concern on her face. She could feel him growing cold.

Ben smiled at her. He had given Rey back to the galaxy. It wouldn’t atone for the darkness he’d wrought, but it was what he could do.” [via ComicBook] 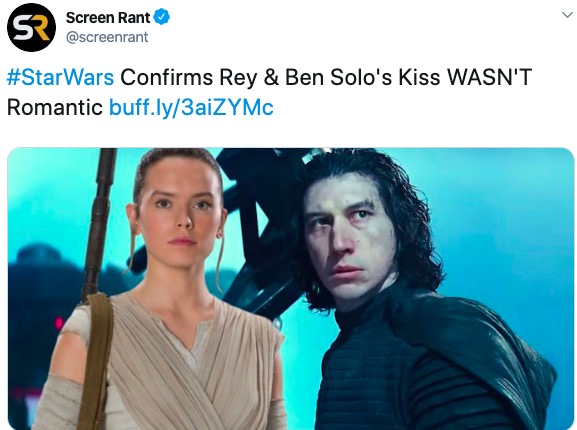 Nope! Not romantic at all. Just one dude saying, uh, thank you (?) to his virtual spiritual counterpart. “Thanks Rey! Here’s a smooch. Time for your boy to evaporate! Deuces!”

At this point, Disney’s commitment to making The Rise of Skywalker as much of a farce as possible is beginning to earn my respect. The movie was a pile of shit to begin with and the Mouse House’s constant meddling with and retconning of key plot details is only making the film more comical in the process.