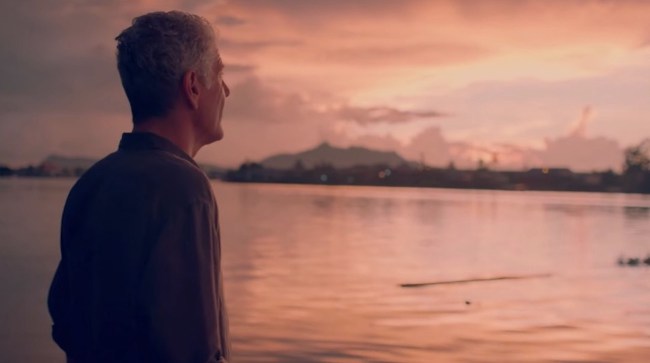 Ah, man… I did not expect this on a Thursday morning. Just wasn’t quite prepared for it, if we’re being honest, as the passing of Anthony Bourdain is one of those celebrity deaths, similar to Mac Miller or Robin Williams,  simply cuts on a deeper level. At least for me. Beyond the general appeal of Bourdain, perhaps it was his Italian-American, New Yorker, no BS persona that rang so true with my family and why he’s stuck with me for all these years (my last name is Italiano, my family is from Queens). Bourdain was far more than a celebrity chef — he was a connoisseur of life.

It’s now, somehow, been close to three years since Bourdain’s suicide, and yet his cultural impact remains arguably as relevant as ever, as the late, beloved chef is set to be the subject of the upcoming documentary Roadrunner: A Film About Anthony Bourdain, whose first trailer dropped this morning.

Here’s the official synopsis for Roadrunner: A Film About Anthony Bourdain, via Focus Features:

It’s not where you go. It’s what you leave behind . Chef, writer, adventurer, provocateur: Anthony Bourdain lived his life unabashedly. Roadrunner: A Film About Anthony Bourdain is an intimate, behind-the-scenes look at how an anonymous chef became a world-renowned cultural icon. From Academy Award®-winning filmmaker Morgan Neville (20 Feet From Stardom, Won’t You Be My Neighbor?), this unflinching look at Bourdain reverberates with his presence, in his own voice and in the way he indelibly impacted the world around him.

Rest in Peace, Tony — I’m still learning from all the things you taught me.