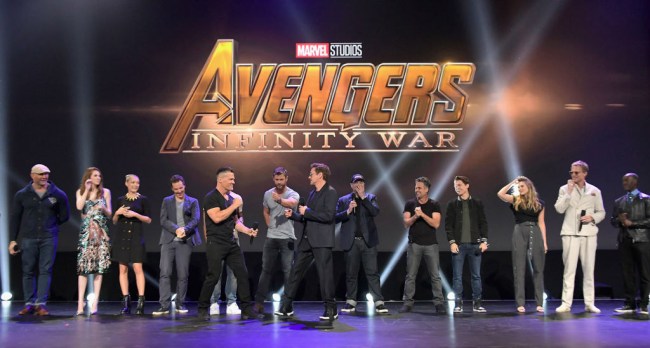 Avengers: Infinity War reportedly has one of the biggest movie casts we’ll ever see, so imagine how big the crew must have been for the 12 months of shooting it took before finally reaching its conclusion this month. After putting that much work into just one movie, Robert Downey, Jr. decided to reward the entire crew of the film with a special personalized gift.

Patrick Istorico, a film grip on the movie’s production, shared a picture of RDJ’s gift that apparently came straight from Stark Industries and has a plate on it inscribed with “HEART FELT THANX FROM THE CENTER OF MY ARC REACTOR” and signed by Downey.

“Robert Downey Jr. went for it and got the entire crew personalized cast chairs. Out of control. #infinitywar #marvel @robertdowneyjr Thank you!!!” wrote Istorico.

Screen Rant reports Downey has always been generous with his Avengers co-workers.

This is not the first time that we’ve heard about Downey Jr.’s generosity on the set of these Marvel films. Just last weekend during a panel at Ace Comic-Con, Evans openly gushed about his co-star, revealing that he made sure everyone felt welcome and comfortable during the rigorous process of shooting the Avengers films. Prior to that, his castmates on Captain America: Civil War famously talked about being invited to lunches in his trailer while filming. It makes sense that the actor plays the unofficial leader of the group given that he is considered the godfather of the MCU and one of the driving forces that launched the successful franchise.

To put the how big this film is in perspective, here’s what Chris Hemsworth had to say to the Toronto Sun about the movie’s production…

“I finished literally two days ago and I looked at (directors) Joe and Anthony (Russo) and said, ‘I don’t know how you guys have gotten this far and I don’t know how you’re going to hold it together and complete this thing, but my hat’s off to you.’

“This is one of the biggest things in film history and to be a part of it was just incredible. I think what these characters are about to face — with Thanos — there’s been nothing quite like it. There are 76 cast members or something like that. I think what people are going to be excited about is what I was excited about and that’s Thor meeting the Guardians and Iron Man meeting Doctor Strange.”

So is there any chance that Avengers: Infinity War can live up to the hype? I can’t wait to find out.

Heck, even the wrap cake was cool.