All Of The Best Reactions To ‘Rogers: The Musical’ In The ‘Hawkeye’ Trailer 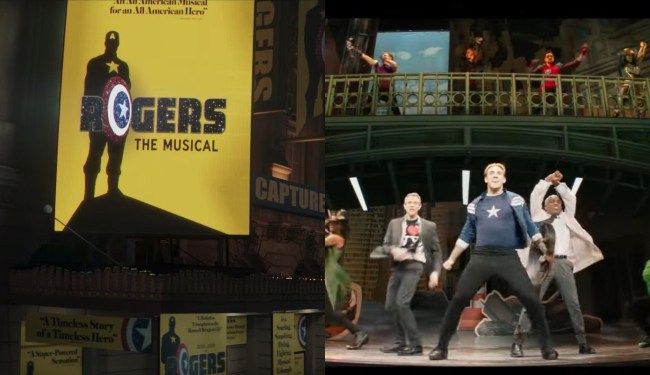 I recently got the ole Blue Checkmark over on Twitter. In case you didn’t know, that entitles me to act like a pompous douchebag without any remorse. My opinions are now officially the only ones that matter anymore. Sorry not sorry. Don’t shoot the messenger.

But in all seriousness, in my line of work, the Blue Check is both a blessing and a curse. The positives are that I can more easily get the attention of important people in the industry, and will have my opinions about movies and television more widely seen — you know how all those websites round-up “first reactions” to movies.” That’s what I mean. And for someone whose job it is to write about movies and TV, that’s a good thing!

The negatives, however, certainly exist, and I got my first taste of that when the Hawkeye trailer dropped on Monday. Because I try my best to be an objective critic, I — just weeks removed from calling Shang-Chi and the Legend of the Ten Rings one of the best things Marvel Studios has ever done — tweeted that I thought the Hawkeye trailer looked “extremely mid.” Not too harsh of a critique, I simply meant that the trailer really didn’t do it for me. And trust me, I genuinely hope Hawkeye proves me wrong! Maybe that makes me the Grinch in this Christmas story. Nevertheless, my tweet attracted a couple of crazies in my mentions, and I — being the stubborn New Jersey Italian that I am — simply could not resist arguing with them.

Perhaps those critical of my Hawkeye opinion should consider the fact that the main talking point following the trailer’s release, other than Lucky the Pizza Dog, of course, is the brief look at “Roger: The Musical”, an in-universe Broadway show about the life and death of Steve Rogers — a concept that elicited some hilarious reactions from Marvel fans:

bucky barnes playing the damsel in distress in the rogers: the musical meanwhile the real bucky is sitting watching like: pic.twitter.com/LUNtDnK8nq

Shut up, the only thing I care about now is ROGERS: THE MUSICAL pic.twitter.com/RUThHdRRX9

Me getting excited for Rogers the Musical even though Hawkeye is the main show pic.twitter.com/tVawKrptr4

sam taking bucky to go see rogers the musical and afterwards trying to make conversation by asking how historically accurate it was and bucky says “i don’t know i don’t remember” pic.twitter.com/Ha8H7jrpEp

-Just a Kid from Brooklyn
-The Flagpole
-Gee, Captain Phillips
-My Shot (Of Super Soldier Serum)
-Star Spangled Man with a Plan
-Hide-Ee-Ho Hydra
-Til the End of the Line/Our Dance
-After All This Time
-The Sacrifice Play
-You Getting Sleepy/I Could do this All Day https://t.co/j29CfuBEZS

rogers the musical goes something like:
1- brooklyn babies
2- not a perfect soldier
3- war wears my name
4- the star spangled man
5- victories on our shoulders
5- the train
6- cold days and colder nights
7- til the end of the line
8- but a good man

Friendship with “Agatha All Along” has ended

Now “Rogers: The Musical” is my Best Friend…😌 pic.twitter.com/GnlQQMgWNy

Chris Evans has literally been preparing to star in Rogers the Musical his ENTIRE LIFE 😭😂 pic.twitter.com/ab4Imylj9e

Hawkeye stars Jeremy Renner as Clint Barton, Hailee Steinfeld as Kate Bishop, Vera Farmiga as Eleanor Bishop, Fra Fee as Kaz, Tony Dalton as Jack Duquesne, Zahn McClarnon as William Lopez, Alaqua Cox as Maya Lopez, and Florence Pugh as Yelena Belova. The series — the fifth television show set in the Marvel Cinematic Universe following WandaVision, The Falcon and the Winter Soldier, Loki, and What If…? — will premiere on Disney+ on November 24.