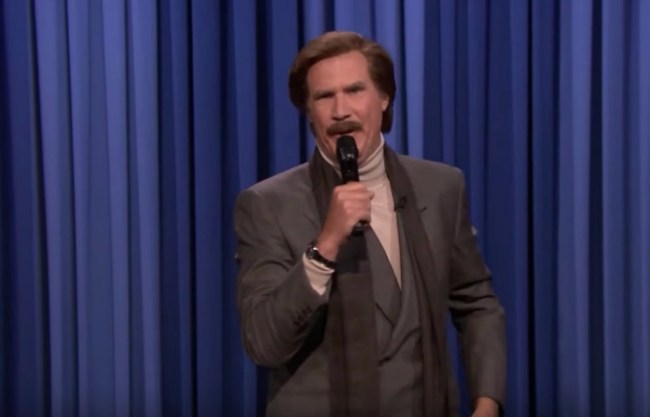 Will Ferrell dusted off his suit last night and showed up at 30 Rockefeller Plaza to reprise the role of ‘Ron Burgundy‘ from Anchorman. Will Ferrell slipped right into the role of Ron Burgundy and kicked the appearance off by grabbing the microphone for some stand-up-comedy.

As you might imagine, Ron Burgundy has a very distinct presence on the comedy stage. He’s more of a teleprompter reader than a gentleman who lets his thoughts go on the fly but that’s also what makes this clip so perfect.

After talking about his love of heckling players in the outfield at Yankees Stadium, Ron Burgundy turns to discussing his beef with Shawn Mendes which I can’t say is something I expected from a Ron Burgundy stand-up set but here we are. Just sit back, relax, and bask in the neon glow of Ron Burgundy:

Ron also sat with Jimmy Fallon for an interview after the stand-up set (Will Ferrell as Ron Burgundy) and the interview is just as fantastic as the stand-up comedy. He discusses getting into a knife fight with Kylie Minogue while recording The Ron Burgundy Podcast and answers some rapid-fire questions for Jimmy:

I haven’t really found a reason to tune into The Tonight Show Starring Jimmy Fallon in a while. The viral videos with Justin Timberlake seem like a lifetime ago but it’s great to see more stuff like this from Jimmy and Ron. That’ll probably change though as Jimmy Fallon is set to open up Sunday night’s post-NFL telecasts with a week of live shows instead of the typical pre-recorded shows.

So it does seem like there are some more good clips/moments like this Ron Burgundy one on the horizon. It’s also sort of a downtime of the year and I suspect ALL OF TV is about to get a lot better with the NFL coming back.