An Armed Robber At Roscoe’s Chicken And Waffles Only Demanded Food And Honestly, I Get It 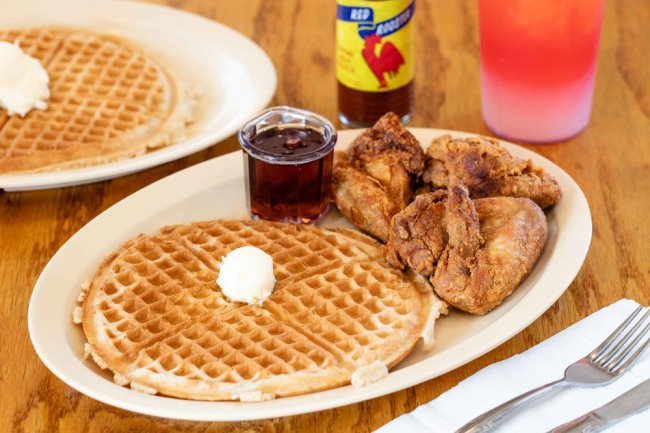 I do not condone armed robbery. In fact, I am openly against armed robbery. But… if I were to make allowances for a stickup, it would be for this guy at Roscoe’s House of Chicken and Waffles in Pasadena.

According to ABC7 News Los Angeles, a man was denied service for not wearing a mask (not cool) and returned with a gun. He showed up at the back of the restaurant with the firearm, which confused the Roscoe’s staff because the cash registers were in front. As it would turn out, money was not the object. He walked into the kitchen just before 6:00 p.m. and held line cook Robert Gonzalez at gunpoint, demanding all of the chicken and waffles they could give him.

“He comes straight toward me with a gun, pointing at me and saying put all the chicken in the bag,” Gonzalez said.

The suspect did not take a single dollar, but left with as much food and syrup as he could grab before he ran out.

“He didn’t take any cash,” manager Angela Prieto said. “He actually took chicken and before he walked out the door he took syrup for his chicken.”

If you’ve never had Roscoe’s, or chicken and waffles in general, you might ask why the man was so set on his dinner without financial restitution. Well, it starts with the fact that perfect fried chicken is hard to come by. Roscoe’s is a Southern California staple and has been serving the simple meal since 1975. There are eight locations across the area, each of which are packed at most hours of the day. For good reason.

The skin on a good piece of fried chicken should be crispy, not soggy with grease. The meat should be plentiful, dense and juicy, not meager and dry. does it right. A waffle must be presented in the same way. A perfect crust on the outside, fluffy on the inside. Add in some hot sauce for the chicken… maybe some syrup over top to finish it off… *chef’s kiss*

This dude should have just worn a mask in the first place, but he didn’t take any money and he didn’t hurt anyone. Roscoe’s is that good, I can’t blame him. If the craving calls, you have to answer.