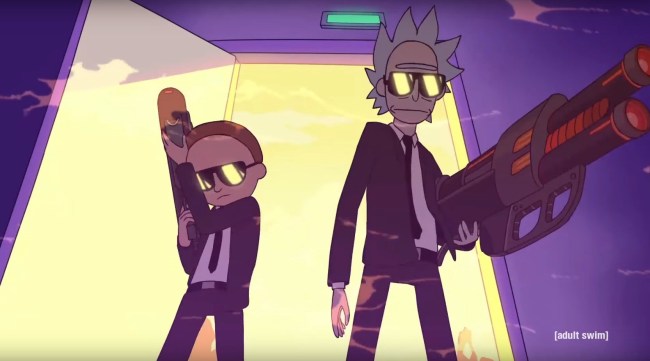 We will probably not get a new Rick and Morty episode for a very, very long time. To attempt to satiate your never-ending thirst for new Rick and Morty, we do have this Run The Jewels music video that features everyone’s favorite time-traveling mad scientist and grandson battling insectoid Gromflamites.

The music video has a very Men in Black alien-blasting feel as well as the cantina scene from Star Wars, but also has some Pulp Fiction-esque moments. The new video is directed by Rick and Morty director Juan Meza-León, who helmed many episodes such as “The Rickshank Rickdemption” and “The Whirly Dirly Conspiracy.” The video is fantastic, but also sad since this might be as close as we get to new Rick and Morty for a very long time.

The inter-dimensional traveling duo ended Season 3 back in October and we might not get new Rick and Morty until “late 2019.” Rick and Morty writer and producer Ryan Ridley said, “I know how long this show takes to write, let alone animate,” Ridley said. “I’d be surprised if there was a fourth season on the air anytime sooner than 2019… late 2019.”

As of right now, Adult Swim has yet to order Season 4 of Rick and Morty. The hit TV show’s co-creator Dan Harmon announced that the show “hasn’t been ordered by a network” after a “fan” called Harmon a “lazy alcoholic” for not producing new R&M.

I hear ya, tough spot. On one hand, it can be challenging, especially with crippling lazy alcoholism, to write a show that hasn’t been ordered by a network. On the other hand, the thought that fans like you pay the price…I mean…I’m gonna grab a drink https://t.co/mvn9nthxCE

Let’s hope that Adult Swim orders a season four of Rick and Morty way before their festival in October.