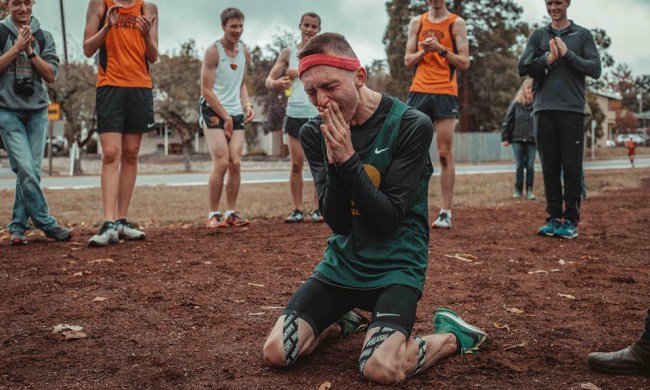 If you’re looking for the “Feel-Good Video of the Day,” you’ve come to the right place. BroBible readers, meet Justin Gallegos, a runner and a junior at the University of Oregon. He is part of the school’s running club and last week he became the first professional athlete with cerebral palsy to sign a contract with Nike.

In the spring, Gallegos set a personal goal to finish a half-marathon in under two hours. Despite being straddled with the difficulties of having cerebral palsy, Gallegos would not let the disorder stop him from running a half-marathon.

Cerebral palsy is a disorder that affects a person’s ability to move, muscle tone, balance, and posture. So those who are suffering from this debilitating condition would definitely find running extremely difficult and running a half-marathon near impossible. Gallegos was forced to use a walker when he was a small child before physical therapy helped him become independent.

Gallegos ran a half-marathon recently and received support from his own school’s track club as well as runners from rival Oregon State University. After finishing the race, Gallegos was presented with a three-year Nike contract by Nike product insights director for running footwear, John Truax, and you bet he signed it. Gallegos became the first pro athlete with cerebral palsy to sign a Nike contract.

A film crew captured the emotional moment that Gallegos became one of the brand’s official athletes. The powerful film was released on Saturday, which was World Cerebral Palsy Day. Gallegos finished the 13.1-mile run just shy of his goal with the time of 2:03:49. But I would bet that Justin gets his sub-two-hour half-marathon very soon.

“Today I made Nike history and became the very first athlete with Cerebral Palsy to sign a contract with Nike! You don’t realize how realistic and emotional your dreams are until they play out before your very eyes! Signing this contract was a huge success for me and I would not have made it without my friends and family and teammates! This was perhaps the most emotional moment in my seven years of running! Growing up with a disability, the thought of becoming a professional athlete is as I have said before like the thought of climbing Mt. Everest! It is definitely possible, but the odds are most definitely not in your favor! Hard work pays off! Hundreds of miles, blood, sweat, and tears has led me here along with a few permanent scars! But the journey is damn sure not over!!! Looking back, I would guess there is only a few select people who would see me were I am today! I have gone through just about everything in the book to be where I am today! I was once a kid in leg braces who could barely put on foot in front of the other! Now I have signed a contract with Nike Running! Trust the process! And most of all trust in God! God is good! Thank you to all my friends, family, and teammates on running club, and now a brand new atmosphere on teammates with Nike! This moment will live forever! Thank you everyone for helping show the world that there is No Such Thing As A Disability!

I’m still at loss for words! Thank to everyone for the love and the support not only the past couple days but the last seven years of my life! Beyond blessed to officially represent the swoosh! Still can’t believe I made Nike history! Very excited! Big things are yet to come! Trust in the process! And trust in God! All glory to the most high! God is truly good!

Congratulations to Justin! You definitely earned this contract because of your unending dedication.