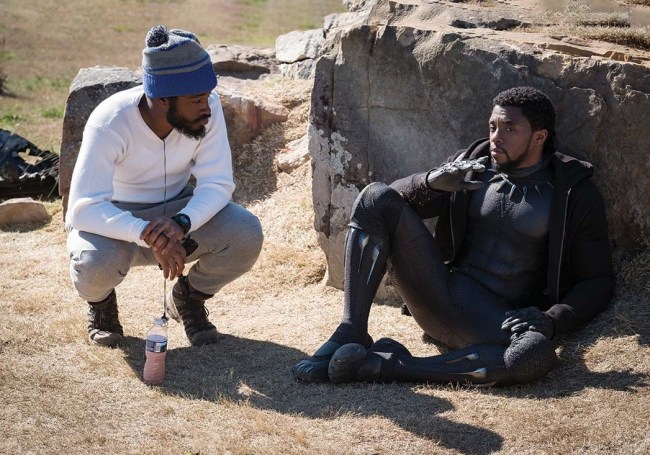 Despite the fact that it’s been over a year — over a year! — since the death of Kobe Bryant, absolutely none of it feels real. The same can be said about Chadwick Boseman, who tragically passed away back in August.

Maybe it’s because of how young they were — Boseman was actually two years older than Bryant at the time of this death — or how suddenly it happened, but something about the deaths of these two icons just hasn’t quite registered yet, and I’m not sure it ever will.

For those who knew and worked with Chadwick, though, the show must go on — at least that’s how Black Panther director Ryan Coogler feels.

In a recent interview with The Hollywood Reporter, Coogler broke his silence on what it’s been liking working on Black Panther II, which is set to begin filming this summer, without his friend and franchise star Chadwick Boseman.

“It’s difficult,” he says of proceeding with the film, which is slated to start production in July for a July 2022 release. “You’ve got to keep going when you lose loved ones. I know Chad wouldn’t have wanted us to stop. He was somebody who was so about the collective. Black Panther, that was his movie. He was hired to play that role before anybody else was even thought of, before I was hired, before any of the actresses were hired. On that set, he was all about everybody else. Even though he was going through what he was going through, he was checking in on them, making sure they were good. If we cut his coverage, he would stick around and read lines off camera [to help other actors with their performances]. So it would be harder for me to stop. Truthfully. I’d feel him yelling at me, like, ‘What are you doing?’ So you keep going.” [via The Hollywood Reporter]

At this time, Black Panther II is scheduled to hit theaters in the United States on July 8, 2022. And whatever form the film ultimately takes, we have no doubt that Coogler will put forth something that Chadwick would be proud of.

We’re discussing Black Panther II, The Falcon and the Winter Soldier, and all things Marvel Cinematic Universe over on the Post-Credit Podcast, so make sure to subscribe and check that out.