Ryan Reynolds Wrote A Funny Fake Amazon Review For His Gin, Proceeded To Get Trolled By His Mom… Again 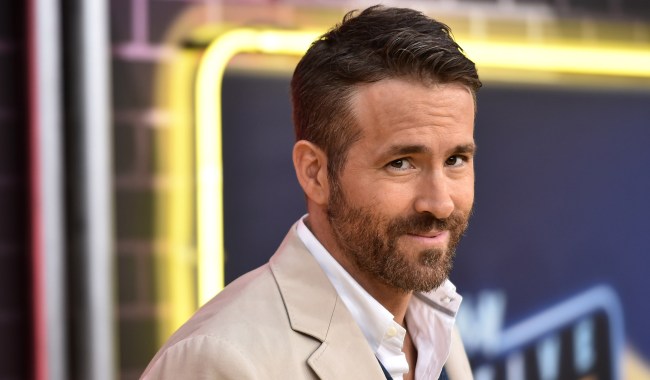 Ryan Reynolds is the king of social media marketing. Whether he’s promoting his Deadpool or Detective Pikachu movies or hawking his liquor company Aviation Gin, he could give a master class on how it’s done.

Of course, being Ryan Reynolds doesn’t hurt, but still, he’s very good at using his talents to get positive attention.

Sometimes, however, his job is made even easier. Thanks to his mom.

That’s right. Ryan Reynolds’ mom Tammy is quickly becoming a social media icon thanks to her willingness and ability to troll the troll himself.

After coming after her son for dragging Jake Gyllenhaal into his “feud” with Hugh Jackman, Reynolds’ mom Tammy showed that she can dish it out as well as she can take it.

Yeah, you’ve made some unsettling romantic decisions. But that never stopped you from being an amazing mom. #HappyMothersDay pic.twitter.com/8H6AIg449P

Happy Mother's Day, Mom. Painfully, you gave birth 468 weeks late. I was 9. We were both so happy to be free. pic.twitter.com/B7TDWRuWUe

So when Ryan posted a fake Amazon review for his gin company over the weekend, she took her shot.

“I just tried Aviation Gin for the first time. Normally, I don’t gravitate towards celebrity brands, but I’d read the Gin was one of the highest rated ever. I loved it and I hated it. What?! Let me explain…

“As soon as I tried the Gin I knew right away, it was amazing,” the user began. “It was the smoothest Gin I’d ever tried and went down really easily.

“What did I hate about it? I wish they’d provide some kind of warning about how much you’re supposed to have. I had a lot… and after a while I felt really great. Eventually, that bubbly and illusory sense of well-being turned into a bit of a blur.

“When I woke up the next day, I mentioned to my wife Linda that last night must have been a REAL blowout because I slept in my clothes. Even my shoes! I also noticed it was really hard to look out the window at the Seattle skyline. Partly because of the bright sun (I’ve always been sensitive to light) but also because I don’t live in Seattle). I live in Coral Gables, Florida. Also, it’s important to note, until that morning, I’d never met anyone named Linda.”

I loved this review of Aviation Gin someone sent me after I wrote it. pic.twitter.com/YZN4KI0ATD

Over on Instagram, Ryan’s mom Tammy hit the comments, writing, “Ahhhh…. yes… I thought I heard my son’s voice in that narrative!!”

To which Ryan responded, “Mom, you say that about every episode of CSI Miami.”

Reynolds’ gin company also had this comment about the review, “Linda works in finance actually…” 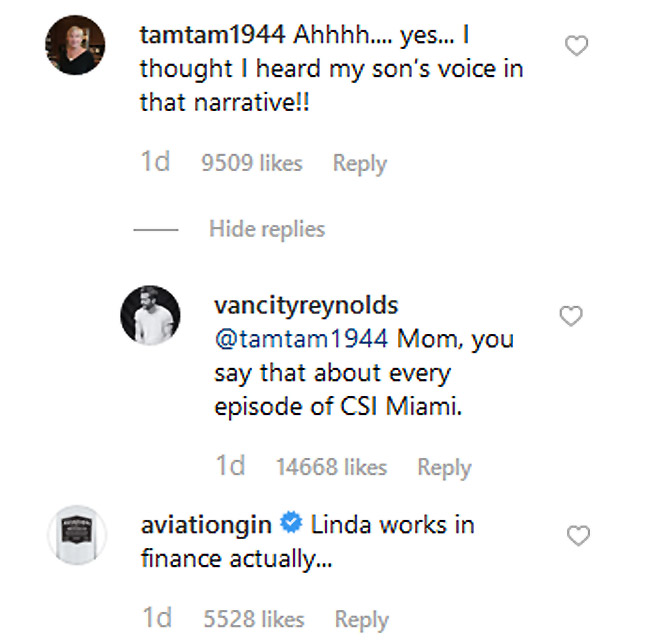 While over on Twitter they wrote, “The marketing department already optioned the screen play btw.”