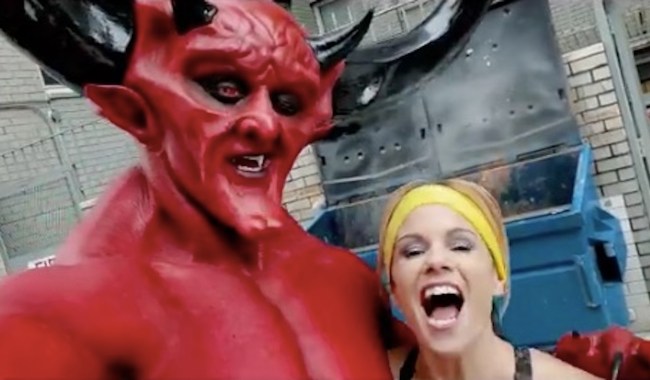 Okay, to be clear, while I doubt Ryan Reynolds himself conceptualized, produced, and filmed this commercial, his production company Maximum Effort — which makes “movies, TV series, content, and cocktails for the personal amusement of Ryan Reynolds and occasionally release them to the general public” — did, and that certainly counts all the same.

In a new advertisement for Match.com (Remember them?! Remember the world of online dating before the apps?), the Devil himself and the personification of the year 2020 falls head over heels in love to the tune of Taylor Swift’s Love Story, resulting in easily one of the year’s funniest commercials.

A match made in hell is still a @match. Latest work from @MaximumEffort #2020LoveStory pic.twitter.com/kGL02PIqin

Also of note in this incredible commercial is it marks the debut of Taylor Swift’s re-recorded version of “Love Story”. As Billboard notes, ever since Taylor Swift’s Big Machine Label Group catalog was purchased in June 2019 by Scooter Braun’s Ithaca Holdings (and more recently, Shamrock Holdings), the superstar has made a plan to re-record her first five albums in an attempt to own her music given the difficult circumstances,” and this snippet of “Love Story” is the first official taste of Swift’s new-old music.

It’s truly amazing that Reynolds still finds the time for stuff like this and his recent Mint Mobile commercials, as he’s arguably in the midst of the biggest period of his career. Not only had Deadpool 3 been greenlit at Marvel Studios, but he’s currently got four different blockbusters on the way — Free Guy, The Hitman’s Wife’s Bodyguard, Red Notice, and The Adam Project. It’s a hell of a time to be Ryan Reynolds and the dude, who obviously just gets it, deserves every ounce of success he’s achieved.