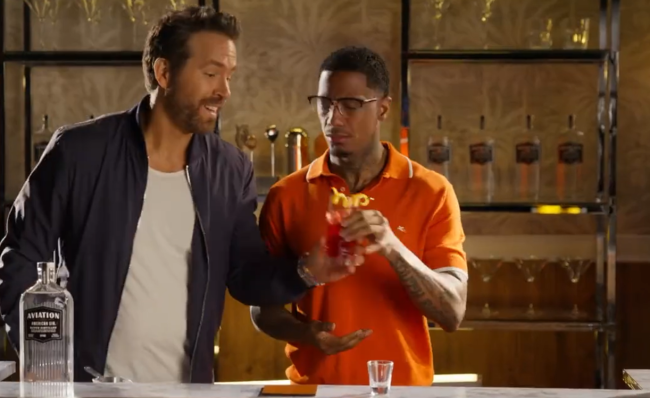 Never one to pass up a golden opportunity for the perfect ad for his Aviation Gin, Ryan Reynolds enlisted the help of TV show host Nick Cannon for a new Father’s Day spot.

In the new video, Cannon introduces viewers to a brand new cocktail made with the gin called The Vasectomy.

“It’s almost Father’s Day,” Nick Cannon starts out. “And the one and only Ryan Reynolds asked me to help all of us celebrate with the mother of all cocktails, The Vasectomy.

Cannon then proceeds to show viewers how to create The Vasectomy.

“First, a tall glass with ice… the way children fill our lives with so much joy,” he explains.

“Next, pour in one ounce of cranberry juice. Sweet… just like their little smiles.

“Then pour in three ounces of tonic. So bubbly… just like I feel every day when I wake up after a long, full night’s sleep.

“Now, add a dash of lemon juice. Fresh, if you have a few minutes to squeeze it, or store bought if the little ones have you running around a bit today. Little motherf…

At this point, Cannon tried to dump the whole bottle into the glass.

After a quick cut, and a retake, the Vasectomy cocktail is complete and Ryan Reynolds enters the screen, taking the drink out of Cannon’s hands.

“I’ll take it from here, Nick. I have three kids,” says Reynolds.

“I have eight,” replies Cannon, causing Reynolds to do a spit take.

Off screen we then hear Reynolds telling Cannon, “C’mon, bring it in. Just hold each other. No wonder you have eight kids, you smell amazing,” leading to the two of them cracking up.

Congrats to @NickCannon! Yes, it’s delicious, but the Aviation Vasectomy is clearly not yet 100% effective. pic.twitter.com/0nHwi2MXox

The timing of this spot couldn’t have been better since on Tuesday’s episode of Angela Yee’s Lip Service podcast, Nick Cannon confirmed that he will soon be having yet another kid, his ninth.

He also already expecting his eighth kid, this time with Johnny Manziel’s ex-wife Bre Tiesi, to be born at some point in the next few months.

So much for Nick Cannon’s stated plan in November of 2021 to become more celibate. Something that was not lost on many people who watched the new ad for Reynolds’ gin company.

Not only is it ineffective, but he’s so quick to have more children, this ad is already out of date.

Says he has 8 kids at the end, and yet… pic.twitter.com/Mz20ourOOz

He needs one of these badly. The commercial is already outdated with Nick’s baby #9 now on the way 😂

Commerical is literally out of date within 17 hours
😂😂😂https://t.co/s4aWGKnmQU