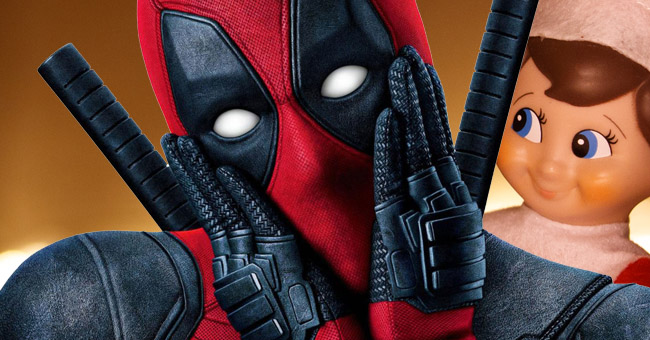 By now, everyone who uses social media should already know that Deadpool star Ryan Reynolds is a must-follow. What makes him such a great follow, especially on Twitter and Instagram, is that (a) he doesn’t overdo it with the posts like some celebrities, and (b) when he does post something he always brings his A game.

A perfect example of that occurred just last week when Deadpool, I mean Reynolds, had the best response of anyone on the internet to the news about Disney buying 21 Century Fox.

Then there was his priceless happy birthday message to his brother, the numerous comical trolljobs he has pulled on his wife Blake Lively (and her payback for it), and on and on it goes.

On Tuesday, one of Reynolds’ Deadpool fans tweeted a photo of Ryan’s alter ego committing a very serious act of violence upon one poor Elf on the Shelf.

Naturally, a photo so graphic and sick as that was bound to elicit a response from the man himself. As usual, Reynolds did not disappoint.

This would make my daughter cry for a hundred years and I have no intention of converting it into wallpaper for her bedroom ceiling, you sick bastard. https://t.co/72tWtGvgEt

These reactions by folks on Twitter were also good ones…

I don't have a elf on the shelf so this happened pic.twitter.com/l1GugznWcW

The Elf stalked the wrong shelf this morning pic.twitter.com/cKMiaMif3P

His Elf ways are not going to save him pic.twitter.com/GSzlQCwTlR

Yes, it most certainly did, Ron.