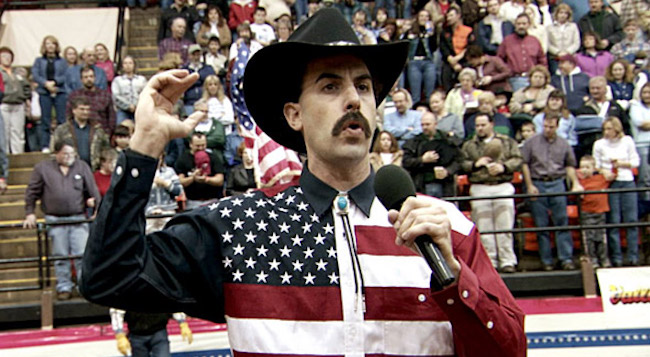 Sacha Baron Cohen has inhabited a number of characters onscreen over the years, including the slang-slinging Ali G and the incomparably fabulous Brüno Gehard. However, there’s no denying history will remember him for his portrayal of Borat Sagdiyev, the eponymous star of 2006’s Borat! Cultural Learnings of America for Make Benefit Glorious Nation of Kazakhstan.

The film introduced a wide variety of two-word catchphrase into the pop culture lexicon— including “Very nice!,” “I like!,” and “My wife!”—but that’s far from the only contribution it made to modern society. The film also helped popularize the “mankini,” a fashion item originally designed for women that was eventually appropriated by way too many men.

I assumed the mankini trend was dead and buried until last week when I read a group of Czech tourists visiting the capital of Kazahkstan were arrested after they busted out the swimsuits in public, which resulted in police issuing each of them a $67 fine.

Few #Czech tourists in #Mankini were detained (for a short period) in #Astana, #Kazakhstan. #CentralAsia pic.twitter.com/PqE1T9u3Gx

It appears word of their arrest got around to Cohen, who took to Facebook to offer to pay for the punishment that came along with their violation of “public order.”

Cohen is no stranger to Borat-related legal trouble himself. When he appeared on WTF with Marc Maron last year, he revealed the FBI opened a file on him during the filming of the movie because they believed he was an ice-cream-truck-driving terrorist.

Borat went on to become Cohen’s most successful film, but its popularity meant he’d never be able to trick most members of the unsuspecting public ever again. I’m just glad to know there are people out there who are carrying on his legacy.