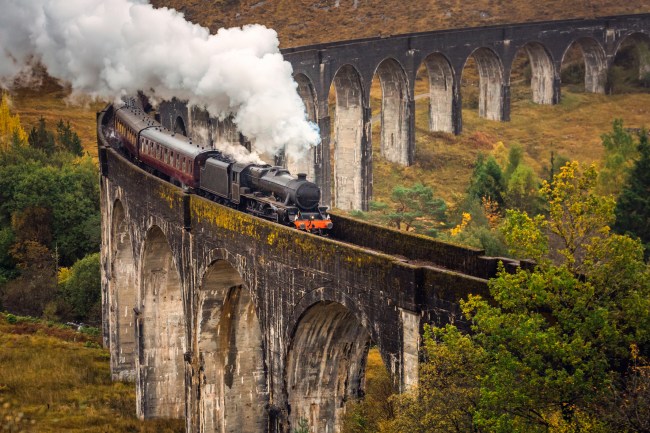 I should feel bad about how hard I’ve been laughing at these sad Harry Potter fans but I can’t stop laughing for long enough to gather any cogent thoughts together. This is just pure and unbridled hilarity for everyone who wasn’t standing on that platform.

Diehard fans of Harry Potter stood on the train platform for hours in anticipation. They were eagerly awaiting The Hogwarts Express to pass by their train station, the train that used to transport the students from Kings Cross Station in London where they’d board on Platform 9 and 3/4 and head to Hogwarts.

I’m man enough to admit that I went to Kings Cross last time I was in London and stood in line to get a picture at Platform 9 and 3/4. The wait wasn’t long and I have a picture of it saved on my phone that I’ll never post. But these folks waited HOURS at the Drumry Station in Clydebank, Scotland to see the Hogwarts Express only to have their dreams destroyed at the last final moment in the funniest way possible given the circumstances.

The fans lost their minds. The responses on Twitter range from ‘That’s 2020. In a video. Right there.’ to ‘This video made my day’ to ‘The Hogwarts Express disappeared. Wizardry at its very best.’ Some fans took it in stride, others not so much, but everyone watching the video had a good laugh.

The other day I was pushing my 1.5-year-old toddler along in his stroller and had his seat facing me. I was wearing my usual flip flops and wasn’t paying attention to the sidewalk. I tripped and stumbled. I’m not even kidding when I say this toddler’s entire body was shaking with laughter as if me tripping was the funniest thing to happen in the history of mankind. The dude’s been alive for a year and a half so to him it might’ve been the most hilarious thing to happen in his lifetime.

What I’m getting at here is it’s okay to laugh at other’s misfortune sometimes as long as you’re not actively rooting for their sadness. I don’t think my son would like to see me actually get hurt but sometimes laughing at other’s misfortune is funny. It’s a fact. But I say sometimes, not all the time. Where you draw the line on that seems to be the deciding factor between whether you grow up with people thinking you’re an asshole or a funny guy. Unfortunately for me, I’m not sure where I’ve drawn that line so I’m probably considered an asshole by most.