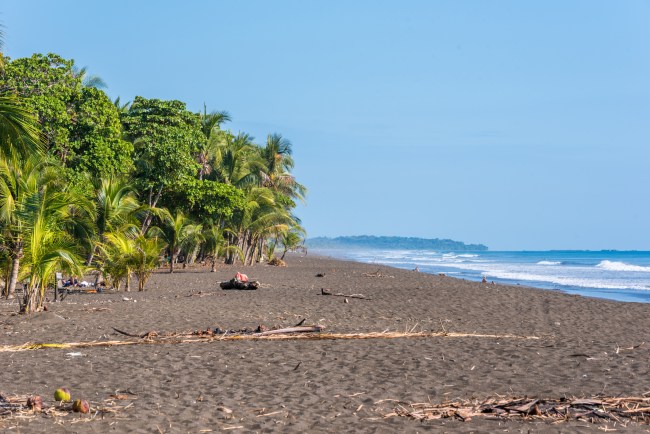 After college, I was fortunate enough to take a month-long road trip around Costa Rica with some friends. It was an epic trip aside from the fact that we later found out one of hte dudes was smoking literal crack in secret the entire time but that answered a lot of questions we had about him.

As most surfing trips to Costa Rica start, we began in the Hermosa/Jaco area and started working our way around the country. Our second destination was Dominical in Bahia Ballena de Osa, the location of this pretty wild incident.

The group of men pulled the ~8-foot saltwater crocodile out of the water using their bare hands and managed to wrap its mouth using a towel. One of the men in the group was a local Dominical lifeguard which is pretty wild considering that guy has 100% seen what these crocs are capable of.

The Metro UK reports the male crocodile showed up after being rejected by the local female crocs. It moved into the area where he spooked surfers and a group of beachgoers but the group of guys who moved it were able to contain the crocodile before anyone got hurt:

I can tell you we saw a literal metric shit ton of crocodiles on that trip but we didn’t see any in Dominical, which means nothing, of course. They’re obviously around the area. The higest concentration we saw were underneath the Tarcoles Bridge, nowhere near surfers:

According to the Metro UK report, after the saltwater crocodile was captured with the towel its mouth was bound using string and the croc was then relocated to Tortuga. They say crocodile and caiman sightings are up 27% in the past two years on Costa Rica’s Pacific coast which is pretty wild considering how prevalent they already are up and down the beaches and river mouths.