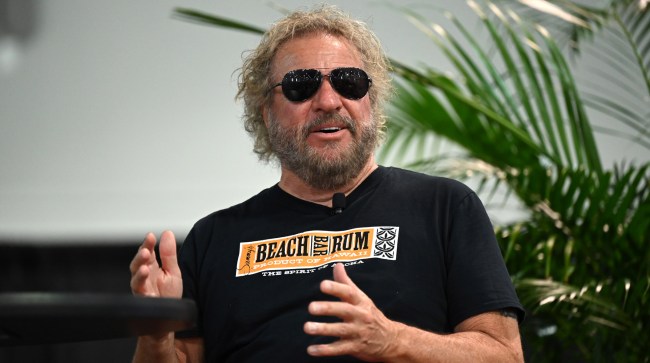 The legendary “Red Rocker” Sammy Hagar recently went into fascinating detail about his alien abduction which he swears happened around 60 years ago.

Hagar, out promoting his upcoming residency at The STRAT in Las Vegas called Sammy Hagar And Friends as well as the launch of his new Sammy Beach Bar Cocktail Company, spoke with J.C. Fernandez of Las Vegas Now on KLAS-TV prior to a rooftop performance.

“Sammy Hagar, I have to ask you the story that came out, I think it is actually in your book, talking about being abducted by aliens,” said Fernandez. “Is that true? And can you expand on that story for us?”

“Yes, it is true. You don’t go around saying stuff like that, you know, people call you a nut,” Hagar replied. “You know, everybody that’s ever asked me about that and expects me to try to backpedal. 100% happened. Four o’clock in the morning, pitch black, dead sleep. I felt like I was being programmed like someone’s tapping into me like it was a string from my head to 13 miles up on a mountain place called Lau Creek. And I know right where it was, these little foothills. There was an object there. There was two people in it, two creatures in it. And it was 19, I want to say it was 64, 65.

“So there was no remote control, no satellites, there was no computers. But I sensed they were tapping into me somehow. And they went, “Oh, he’s waking up,” augmented telepathy, you know, they just did the communication when my head is waking up. They yelled out a numerical code, not of our numerical system. And it went, and I can almost feel the plug, like an electrical charge leaving, zapped into their ship, put a light on in this ship where I see shadows of these creatures. And I woke up in my house and my bed. My room was infinity white, I couldn’t move, I was completely paralyzed, my eyes were open, and all sudden, bam! It just went black. It was the time it was. I broke sweat and I was shaking and I felt like my body was so drained.

“And from that moment on, I believed in UFOs. I started looking into astronomy, I became a junior astronomer. And I started figuring out, ’til before that day, I never even looked at the sky and thought of anything except for there was a lot of stars outside. But yeah, very unique experience. And from that day on I believe hard and you know the universe and UFOs and creatures, the thought of us being the only ones in this giant universe when you know a little bit about astronomy. You know how big the universe is and what a speck of nothing we are, that to think that we’re the only ones is pretty screwy. Those people are crazier than the guys who believe in UFOs.”

“But I think there’s a whole bunch of different ones. There all over out there. There’s all kinds of dimensions. And I don’t think they were programming me I think they were just interested like, you know, we do with animals. So they had advanced technology, they were sucking my brain to see what I knew. And by me catching them, enlightened me. I didn’t learn anything. They didn’t put something in my brain to make me special. I don’t believe that at all. I just believed that by having that experience and realizing that it happened. My brain went ‘boop’ it was like taking acid, my mind expanded. And I started searching for, you know the truth, and things like that. And I still am.”

Related: Demi Lovato Doubles Down On Her Claim That She’s Been Communicating With Aliens

“And that was in the early 60s, early mid 60s. Do you ever have any experience after that or that was the only time?” asked Fernandez.

“No, no, I’ve had a couple since then too. Different ones different people,” Hagar replied. “These little gray creatures that were hanging out in Lake Placid. I had a house out in the wilderness and I had just no electricity, log cabin back in the early 80s, 81 82 and these little guys are in that cabin one night and you know even slamming doors just I’m not saying Yeah, they were physical guys. I don’t know if they were robots or what but it was freaky. It scared me to death.”

“And is it true, on every single year albums, is there a song that’s titled after space or something with frontier? Do you have a theme going that maybe not everyone picks up on but is there a theme going with every one of your albums?” Fernandez followed up.

“Yeah, Space Station Number Five, first “Montrose” song. Second “Montrose” album was out in 1975, was “Space Age Sacrifice.” My first solo album, Hot Rocks, which changed into another song. But Silver Lights is about the return of the aliens coming back to see check out their planet that they populated somehow you know propagated with you know planted seeds. The next album “Red” had Someone Out There. “Next Turn Up the Music” had A Crack in the World on that record, as far as I can remember. Then I stopped doing it every album. But every now and then I got one on there.”

Hagar concluded the interview by telling viewers, “Anybody that doesn’t believe is crazy!”