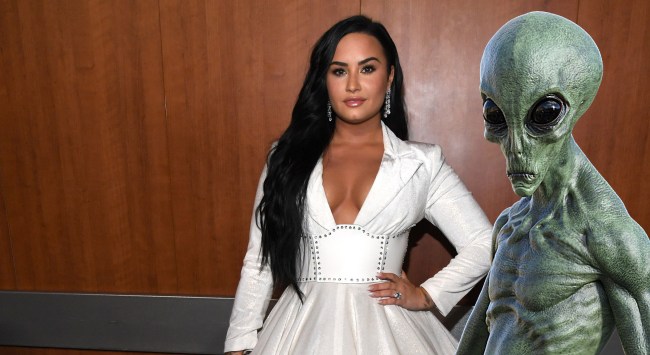 Back in October, singer Demi Lovato revealed that she had spent a few days in Joshua Tree National Park with American UFOlogist Dr. Steven Greer, founder of the Center for the Study of Extraterrestrial Intelligence (CSETI) and The Disclosure Project.

Lovato shared photos and video of her alien experience with Greer on Instagram, writing, among other things, “If we were to get 1% of the population to meditate and make contact, we would force our governments to acknowledge the truth about extraterrestrial life among us and change our destructive habits destroying our planet.”

That wasn’t Lovato’s first alien rodeo, however. In 2016, she told Elle Canada she had seen a “worm UFO” and in 2014 she admitted on Late Night with Seth Meyers that she believes aliens (and mermaids) are real.

More recently, Lovato made an appearance on the Kesha and The Creepies podcast hosted by singer Kesha. (It’s not Ke$ha anymore, right? I liked her when she was Ke$ha. Okay, cool.)

On the show Lovato talked about her experience in Joshua Tree National Park with Greer, and it is really something.

“The week I was in Joshua Tree with [ufologist] Steven Greer I saw a bunch of stuff. We saw this really really bright light [shows photo]. This blue orb kept floating in front of us, 20-30 feet away. When I would walk up to it, it would keep floating back 20-30 feet away.

“Greer calls this blue orb kindness because they had an experience with the same blue orb in the desert where it actually healed somebody’s hearing loss and so they named it kindness.

“I love meditating so much. I would choose a night of meditation over a night out at a club any time especially if it is going to result in contact.

“It was super easy to make contact we had been meditating all week and then it only took us 10 minutes before [we] looked up and saw a saw a ship. It had two red lights… you’re seeing it and you’re just like “cool so everyone else saw that?” Yeah.

“Do you know what astral projection is? The best way I [can] describe it is when your consciousness leaves your body. You can travel to different places in the present future past or you could travel to different planets. You have an out of body experience. The night that I asked that orb to come back and hang out with me in my dreams I fully astral projected in my sleep. I had this experience where I was in my room and these beings were like ‘do you want to come back to our planet?’

“I’m sucked out of my room and I’m just like hovering in deep space. I fly to this pink and purple planet that looked like Dr. Seuss. Then I woke up. I don’t know if it was just a really intense dream, If I full on astral projected or if I was abducted. I’m not really sure. Then my friend had the same experience a week later when he got home from the same trip.”