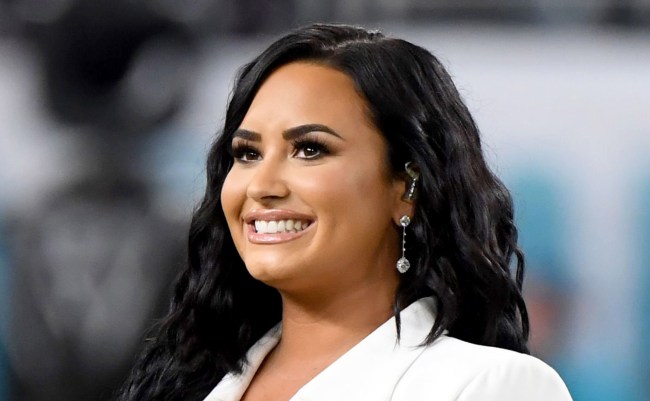 There must be something about being a former Disney child star like Miley Cyrus and Demi Lovato that makes one a bit more open-minded when it comes to UFOs and aliens. Because both of them recently shared experiences they have had with extraterrestrials.

Cyrus, for example, just revealed that she had not only an encounter with a UFO, she also made eye contact with the alien inside the ship.

Her pal Demi, who is apparently in the midst of recovering from her breakup with actor Max Ehrich, recently spent a few days in Joshua Tree National Park with American UFOlogist Dr. Steven Greer, founder of the Center for the Study of Extraterrestrial Intelligence (CSETI) and The Disclosure Project.

This isn’t the first time Lovato has expressed a belief in aliens. In 2016, she told Elle Canada she had seen a “worm UFO” and in 2014 she admitted on Late Night with Seth Meyers that she believes aliens (and mermaids) are real.

Lovato discussed and shared photos and video of her most recent alien experience on Instagram, writing, “The past few days I’ve spent in Joshua Tree with a small group of loved ones and @dr.steven.greer and his CE5 team.

“Over the past couple months I have dug deep into the science of consciousness and experienced not only peace and serenity like I’ve never known but I also have witnessed the most incredibly profound sightings both in the sky as well as feet away from me.

“This planet is on a very negative path towards destruction but WE can change that together.

“If we were to get 1% of the population to meditate and make contact, we would force our governments to acknowledge the truth about extraterrestrial life among us and change our destructive habits destroying our planet.

“This is just some of the evidence from under the stars in the desert sky that can no longer be ignored and must be shared immediately … to make contact yourself you can download the CE5 app and it will teach you the protocols to connect to life form beyond our planet!! (Ps, if it doesn’t happen on the first try – keep trying – it took me several sessions to tap into a deep enough level of meditation to make contact!) Happy communicating.”

Greer, coincidentally, just happens to be the developer of that CE5 Contact app Lovato mentions, which, by the way, is not free (it costs $9.99 for both Apple and Android).

Frankly, I don’t think anyone needs an app to communicate with aliens. As we have seen time and time again, they’re not even trying to hide anymore.

One Instagram commenter asked Lovato after reading her post, “why are you pushing this onto 90 million people.. it’s weird.”

I think we all know the answer to that question.

• UFO sighting over mountain in Mexico provides ‘best close up’ ever of an alien craft, says expert
• NASA turns camera away as UFO is spotted on International Space Station live stream
• Former Senate Majority Leader Harry Reid reveals ‘UFOs interfered with U.S. nuclear program’ in new documentary
• Three lakes found beneath surface of Mars could be home to alien life on the red planet
• Disk-shaped UFO spotted in the sky over Russia adds fuel to conspiracy theories
• 50 foot tall ‘alien robot’ that could be ‘used in combat’ spotted in Area 51 satellite photo
• Japanese defense minister issues official protocols to military for UFO encounters; do they know something?
• Signs of life found on Venus? Alien bio-signature discovered by astronomers on Earth’s ‘twin’
• New study says microscopic aliens may have been visiting Earth, and multiplying, for centuries
• New study suggests interstellar space rock Oumuamua ‘could have been sent by aliens’
• Landmark new research claims evidence of alien life may exist under ancient ice sheets on Mars
• Ex-Pentagon UFO program astrophysicist admits examining ‘vehicles not made on this earth’