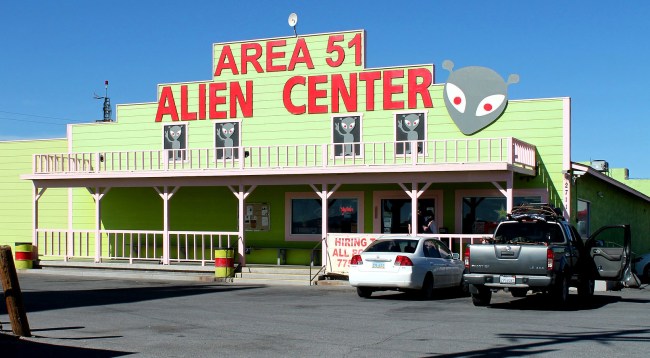 Even though the Storm Area 51 plan fizzled like a wet fart last year, it doesn’t mean there aren’t still nefarious, cloak and dagger operations taking place there.

Further proof of this was brought to light last week by noted UFO and alien expert Scott Waring as he was conducting his ongoing research into the world of the extraterrestrial.

“Guess what?” Waring wrote on his website. “When I was searching Google Earth today I came across something that is really strange. I found a 16 meter dark figure in Area 51 and there seems to be another to the right of it, but shorter.

“When I checked through the past photos of that location, I notice that the figure actually moves onto its side, then changes its poses each photo! It actually moves.

“Now, perhaps some USAF soldier is playing around for years doing this, or perhaps Area 51 is experimenting with 16 meter tall robots that could one day be used in combat missions.”

As we have already seen, the creation and use of giant deadly robots is nothing new for countries like the United States and Japan. Heck, Japan has even created a real-life Transformer that goes from robot to a car in which you can ride. So to think that the U.S. military could be creating such monsters at the ultra secret Area 51 would not be terribly surprising.

Perhaps even more interesting, it’s also entirely possible that what Waring spotted on Google Earth could be one of those “vehicles not made on this earth” that ex-Pentagon UFO program astrophysicist Eric W. Davis says he examined.

As I have been saying for some time now, it’s civilian investigations like this that are the impetus behind government agencies and the scientific community finally starting to take seriously the longheld belief in the existence of alien life.