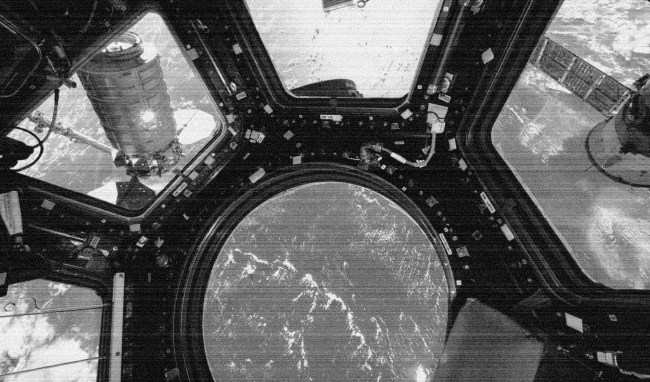 As if we really needed more proof of alien existence, now we’ve got a Russian cosmonaut Ivan Vagner, who is currently onboard the International Space Station (ISS), posted some new video to Twitter which has triggered even more speculation about UFOs.

Vagner’s video, which was ostensibly to film an aurora over Antarctica, ended up revealing five unidentified dots of light moving in unison and making a pass behind Earth from his perspective.

“Space guests, or how I filmed the new time-lapse,” Vagner wrote on Twitter alongside the video.

“The peak of aurora borealis when passing over the Antarctic in Australia’s longitude, meaning in between them. However, in the video, you will see something else, not only the aurora.”

He contined in another couple of tweets, “At 9-12 seconds, 5 objects appear flying alongside with the same distance. What do you think those are? Meteors, satellites or…?

“P.S. The frames were captured 1 per sec and later assembled in a video with 25 frames per sec rate. Meaning, the real observation time is 52 sec.

“P.P.S. The information was brought to the notice of Roscosmos management, the materials were sent to TsNIIMash and the Space Research Institute of the Russian Academy of Sciences for further analysis.”

Space guests, or how I filmed the new time-lapse.

The peak of aurora borealis when passing over the Antarctic in Australia’s longitude, meaning in between them. However, in the video, you will see something else, not only the aurora. pic.twitter.com/Hdiej7IbLU

One viewer of the video broke it down even further and discovered another unexplained anomaly.

it's full of activity! pic.twitter.com/dw5kxyL80D

Many others speculated that the lights were nothing more than some of Elon Musk’s StarLink satellites, because that’s the new go-to explanation when there are UFO sightings such as this these days.

Not everyone was buying that logic though.

this is an ET craft sighting 100%, the reason he has sent it off to the researchers is due to him knowing that this isn't something that's in any correlation to what he knows that we've put into space or occurs naturally in space this is an anomaly he's qualified to know this!!!!

I thought that as well, however, the Russians wouldn't be questioning it, they know who's up there more than anyone.

As the U.S. Senate Intelligence Committee is VERY well aware…