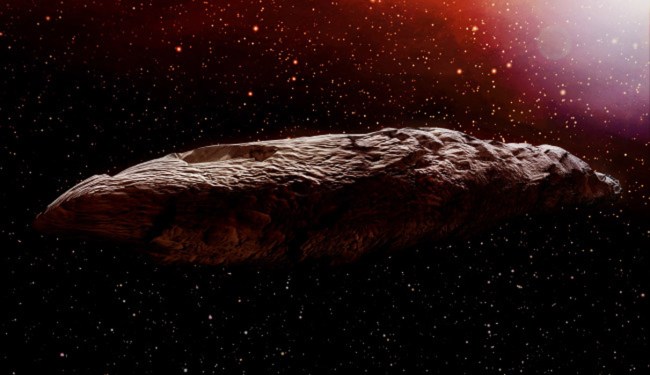 Back in April we discussed the fact that multiple researchers are not willing to dismiss a theory that giant space rock Oumuamua, the first interstellar object of its kind ever seen by humans, could in fact have been created and/or sent here by aliens.

The 1,300-foot long Oumuamua first appeared in our solar system two years ago and baffled scientists and astronomers due to its unique shape – flat and elongated rather than round – and the fact that it doesn’t move like a typical asteroid.

Observation of Oumuamua showed that it was also somehow accelerating and no one could figure out why.

Many scientists expressed the belief that this mysterious acceleration had to be caused by a “natural phenomenon,” because what else could it be? They just couldn’t figure out what the phenomenon is.

However, a new paper published on Monday, Aug. 17 in The Astrophysical Journal Letters by Harvard University astrophysicist Avi Loeb and Thiem Hoang, an astrophysicist at the Korea Astronomy and Space Science Institute, has relit the fire under the theory that Oumuamua is actually alien in nature.

In another recent study published in The Astrophysical Journal Letters on June 9, it was hypothesized that Oumuamua is nothing more than a solid “hydrogen iceberg” due to the fact that it acts like a comet in that instead of ending up in orbit around the sun, it moved in a completely independent pattern due to the gas bursting as the sun strikes it, forcing it away from rather than around the sun.

Loeb and Hoang, however, dispute this notion, reports Live Science, stating that a it would be impossible for a hydrogen iceberg traveling hundreds of millions of years through interstellar space to not have broken up and fallen apart.

“We were suspicious that hydrogen icebergs could not survive the journey — which is likely to take hundreds of millions of years — because they evaporate too quickly, and as to whether they could form in molecular clouds,” said Loeb.

“Thermal sublimation by collisional heating in giant molecular clouds could destroy molecular hydrogen icebergs of ‘Oumuamua-size before their escape into the interstellar medium.

“This conclusion precludes the theory that Oumuamua journeyed to our Solar System from a giant molecular cloud, and further precludes the proposition of primordial snowballs as dark matter.

“Evaporative cooling in these situations does not reduce the role of thermal sublimation by starlight in the destruction of hydrogen ice objects.”

When asked for an alternative suggestion for Oumuamua’s point of origin, Loeb, who in 2012 was named one of Time magazine’s 25 most influential people in space, referred to his upcoming book Extraterrestrial: The First Sign of Intelligent Life Beyond Earth.

Since it won’t be published for a few more months, all we have to go on in that regard is the book’s description.

In late 2017, scientists at a Hawaiian observatory glimpsed an object soaring through our inner solar system, moving so quickly that it could only have come from another star. Avi Loeb, Harvard’s top astronomer, showed it was not an asteroid; it was moving too fast along a strange orbit, and left no trail of gas or debris in its wake. There was only one conceivable explanation: the object was a piece of advanced technology created by a distant alien civilization.

As we always say…