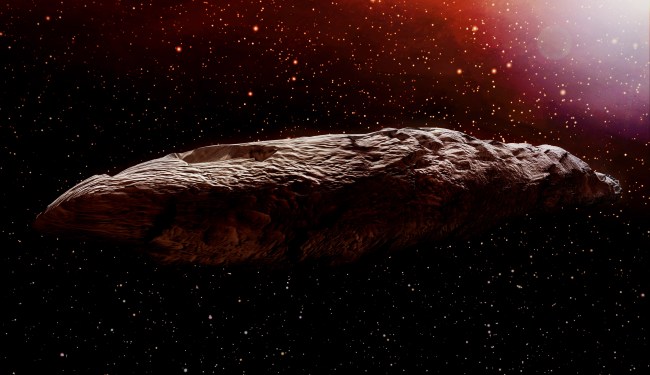 Back in 2017, astronomers noticed something they’d never seen before: a skyscraper-sized object from another part of the galaxy making its way through our solar system.

The object, dubbed Oumuamua, has had scientists completely baffled since its discovery. Mostly because it is the first interstellar object of its kind that us Earthlings have ever seen.

In fact, the 1,300-foot long Oumuamua had scientists so confused a research paper published in 2018 in The Astrophysical Journal Letters by researchers from the Harvard Smithsonian Center for Astrophysics actually offered up the possibility that Oumuamua was “a fully operational probe sent intentionally to Earth vicinity by an alien civilization.”

What makes Oumuamua more unusual than the space rocks we normally see is the fact that it is not round, but is more flat and elongated and it doesn’t move like a typical asteroid.

In the paper, researchers said that if Oumuamua’s unusual movement is caused by radiation pressure “then ‘Oumuamua represents a new class of thin interstellar material, either produced naturally, through a yet unknown process in the ISM or in proto-planetary disks, or of an artificial origin.”

Fast forward to 2019 and University of Maryland research scientist Matthew Knight declared, “We have never seen anything like Oumuamua in our solar system. This thing is weird and admittedly hard to explain. The alien spacecraft hypothesis is a fun idea, but our analysis suggests there is a whole host of natural phenomena that could explain it.”

And now this week we have the results of a study conducted by University of California-Santa Cruz and the National Astronomical Observatories of the Chinese Academy of Sciences.

What this research has lead scientists to believe is that Oumuamua is not an alien probe, but in fact may be a piece of a planet, perhaps one even larger than Earth, that was violently ripped off when it traveled too close to a star.

“Oumuamua-like interstellar objects can be produced through extensive tidal fragmentation during close encounters of their parent bodies with their host stars, and then ejected into interstellar space,” said UCSC astronomer Douglas N.C. Lin.

Yun Zhang, a co-author in the study, said, “The discovery of ‘Oumuamua implies that the population of rocky interstellar objects is much larger than we previously thought. On average, each planetary system should eject in total about a hundred trillion objects like Oumuamua.”

That or it could just be a very well-disguised alien probe. One of those things.