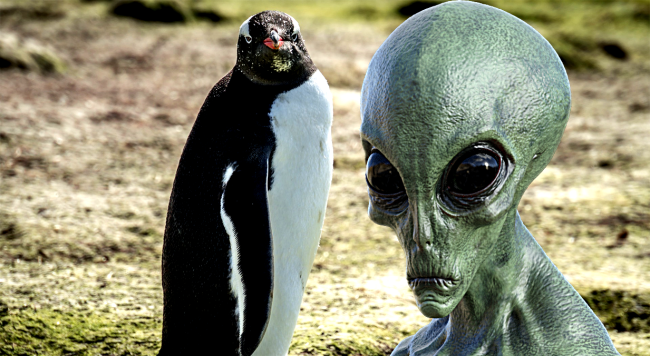 Penguins are already an anomaly considering the fact that they are birds who can’t fly, but are they actually extraterrestrial? That’s what a new discovery by a group of scientists had made some of them wonder.

Researchers in the United Kingdom recently realized that traces of a chemical that exists only on the planet Venus – 38 million miles away – is also in the poop of penguins.

The chemical, phosphine, is one of the major components available in the atmosphere of Venus. That discovery was only made in 2020 when astronomers discovered traces of phosphine in the clouds of Venus.

Scientist Dr. Dave Clements of Imperial College London told The Daily Star, “We’ve reprocessed the data and we’re pretty convinced that the phosphine finding is real, but we don’t know what’s making it.

“There are some anaerobic bacteria that produce phosphine. It’s found in pond slime and the guts of badgers and in piles of penguin guano. It’s very hard to measure and study because if you let oxygen in, it destroys it.

“We don’t know why anything produces phosphine at all because it requires energy. It’s not a byproduct like methane, so it may be something to do with defence or signaling against other competing bacteria.

“We would really like to study the penguin guano to understand the biology, but it’s quite hard for astronomers to get a grant proposal to go and play with penguins, so we’re trying to navigate through interdisciplinary fields.”

Interest in this discovery has only been heightened by the fact that the James Webb space telescope launches in December.

The telescope, a joint venture between the European Space Agency (ESA), NASA, and the Canadian Space Agency (CSA), will be searching space for chemical signatures of alien life on other planets.

Related: UFO Debris From Various Alleged Crash Sites Is Being Studied In A Stanford Lab

The James Webb space telescope will also be searching for something called the “Cosmic Dawn” or the moment that the first stars burst into existence, reports the Telegraph.

“We’re looking for the point when the lights first turn on in the universe, which is arguably, the origin of life,” said Dr. Clements. “If we see it, it won’t look like these beautiful images of galaxies we get from Hubble, but more like a very faint blob. But the implications of these blobs can be profound.”

According to The Daily Star, scientists in the United Kingdom believe alien lifeforms may have already been detected and that studying penguins may help them identify organisms that exist on other planets. Like penguins.