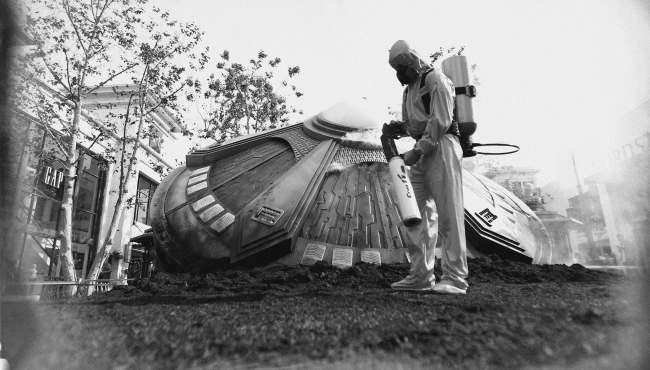 Debris from several UFO cases dating back to 1947 is now being studied by Dr. Gary Nolan at the Nolan Lab at Stanford University. (Yes, the lab is named after him, so you know he’s good.)

In a recent interview with KQED, Nolan discussed how he got involved in UFO studies and what he’s currently working on with his research.

Nolan says he first got involved working on UFOs when he “was approached by some people representing the government and an aerospace corporation to help them understand the medical harm that had come to some individuals, related to supposed interactions with an anomalous craft.”

I wonder if they were wearing black suits, white shirts and Ray-Bans. Not that he would remember. Neuralyzers and all that…

Currently, Nolan is working on alleged artifacts from UFOs, including some from a case previously worked on by famous UFO researcher Jacques Vallee.

“You can think of it as almost like investigative forensics,” Nolan explained. “Somebody claims something happened or didn’t happen. And so you use whatever psychological or scientific means to investigate and document the case.

“And in the case of some of these materials, they’re almost all metals that are claimed to have either been dropped by these UAPs, or somehow left behind.

“In the case of Trinity, two boys got into what they claimed is a craft and took a piece of it. And they’ve kept it since 1945.

“The things that interest me the most are the cases where there are claimed changes in the isotope ratios of given elements,” said Nolan. “The point I’ve always made is we don’t know why you would do that in the first place, because it’s expensive. And so if somebody is engineering isotope ratios for a practical purpose, I’d like to understand why, because that would be evidence of an understanding of material science that we don’t currently possess.”

Despite the “usual giggles” from some of his colleagues regarding his UFO studies, Nolan says, “I think the crux of the whole issue here is: Why are we afraid of talking about it?

“It’s interesting that suddenly in the last year this has come to national attention. We train these pilots for tens of millions of dollars, and we entrust them with multimillion dollar pieces of equipment. Now people are coming to me who kind of giggled in the past, and they’re saying, ‘Garry, it looks like you might have been right. I’m really interested in this. Can you tell me more?’ It’s a little bit more open now, and that’s a good thing. And if it is disproven, ultimately, I’m perfectly fine with that.”

Nolan also added that he isn’t alone. There are dozens of scientists currently working on various UFO cases. They just aren’t as public with it as he is.

Science News reports that Nolan has studied some of this alleged UFO debris using a machine that enables scientists to look at the atomic structure of a selected material.

The process, called Multiplexed Ion Beam Imaging (MIBI), revealed that the composition of the debris was unlike any currently known metal.

“If you’re talking about an advanced material from an advanced civilization you’re talking about something that I’ll just call an ultra material.” said Nolan. “It’s something which has properties where somebody is putting it together again at the atomic scale. We’re building our world with 80 elements, somebody else is building the world with 253 different isotopes.”