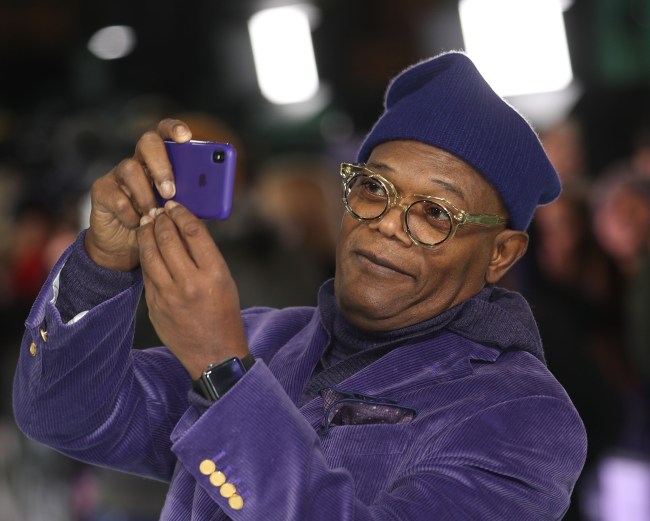 Samuel L. Jackson, the coolest mother f*cker in Hollywood, was recently crowned as the MOST BANKABLE ACTOR in show business. The 120+ films he’s appeared in throughout his career include Pulp Fiction, the Avengers franchise, Jurassic Park, and the Star Wars prequels.

These movies have made him Hollywood’s lone $13 billion dollar man. His films have earned $5.76 billion at the box office in America and $13.3 billion worldwide. That’s better than Harrison Ford’s $4.96 billion (domestic) and the $4.6 billion (domestic) of Tom Hanks. Nobody brings in more money than Sam Jackson.

The Hollywood Reporter recently did a lengthy profile on Samuel L. Jackson after he was named the Most Bankable Actor in Hollywood and it’s a great read. It starts out exactly as you’d expect, with Sam showing up to an interview at a diner in NYC exactly on time. Not a minute early or late. Sitting down and telling the reporter ‘Go ahead, I’m listening.’

In the profile, Samuel L. Jackson discussed everything from how he landed the role in Pulp Fiction to how he got his first breakout role (as a crack addict) immediately after he went to rehab for crack addiction. It started in the 60s with other drugs and later progressed to the hardest street drug around.

For Jackson, rock bottom arrived when his wife and daughter discovered him lying face-down and unconscious on the kitchen floor, surrounded by drug paraphernalia. Richardson — who refers to this period as her “villa in hell” — insisted Jackson go to rehab, which he did. He was ready. “I’d been getting high since, shit, 15, 16 years old, and I was tired as fuck,” he says. While detoxing, he was sent a script by Spike Lee, for whom he had already done a string of smaller roles in films like Do the Right Thing and Mo’ Better Blues. Lee wanted him to play Gator, the crackhead brother of Wesley Snipes’ character in the interracial romance Jungle Fever. Ironically, the first role Jackson would take as a sober actor would require him to play a crack addict. “All the people in rehab were trying to talk me out of it,” he recalls. ” ‘You’re going to be messing around with crack pipes. All your triggers will be there. Blah, blah, blah.’ I was like, ‘You know what? If for no other reason than I never want to see you motherfuckers again, I will never pick up another drug.’ ‘Cause I hated their asses.”

Around the time of the movie’s release, Jackson had an inside joke with his agent, Toni Howard of ICM Partners, who has represented him for 25 years. Jackson had watched over a number of years as members of his circle of actor friends — first Morgan Freeman, then Denzel Washington, then Snipes, then Laurence Fishburne — would jet off to Hollywood to make names for themselves. “I’d call my agent and say, ‘Hollywood call?’ And she’d always go, ‘No.'” But when Jungle Fever premiered at Cannes in 1991 — Lee did not fly Jackson to the festival, explaining that there was only budget to bring “the stars” — Jackson’s performance as Gator caused such a sensation that the jury honored it with the festival’s first, and only, best supporting actor award. “That day I’m out at some audition,” Jackson recalls, “and I called my agent, and said, ‘Did Hollywood call?’ And she’s like, ‘As a matter of fact, they kind of did.'” Lee has never apologized to Jackson for leaving his breakout star back in the U.S. “Not only that,” Jackson says, “when he came back, he didn’t actually give me my goddamn award for, like, eight months!” (via)

That’s some bullshit right there. The man wasn’t even there to receive the first major award of his career and then his agent didn’t even give it to him for the better part of a year.

Another great part of the profile that caught my attention is how he landed his iconic role as Jules Winnfield in Quentin Tarantino’s Pulp Fiction, a role that would lead to a lifelong working relationship between Jackson and Tarantino. It started with Sam Jackson reading for the part of Holdaway in Reservoir Dogs with Tarantino.

.@SamuelLJackson reveals his most-loved line from Pulp Fiction, favorite Avenger and more in a round of fishing for answers. pic.twitter.com/FsfmVV9sdG

He didn’t get the role and he left that audition not knowing who Tarantino was and thinking that Quentin was an actor, and the worst actor he’d ever read with. Flash forward a few months to the Sundance Film Festival and both Tarantino and Jackson are there. Sam approached Quentin to tell him how much he liked Reservoir Dogs but that it would’ve been better with him in it.

That’s when Tarantino told him he was writing a part for Sam (the part of Jules)…This part would eventually cement Jackson’s status as one of the coolest men alive.

When the Pulp Fiction script arrived it blew Samuel L. Jackson away:

Jackson read the script twice. “I vividly remember getting to the end of it and being like, ‘Wow. Get the fuck outta here. Is this shit that good or am I just thinking, because he wrote it for me, I think it’s that good?’ So boom, I flipped it over and read it through again.” It was that good. (via)

That role led to a lifelong friendship with Bruce Willis that would see the actors work together in Die Hard With a Vengeance, another movie that killed it at the box office.

You really should check out the full article on the Hollywood Reporter because it’s all great. Just click that link and head on over.