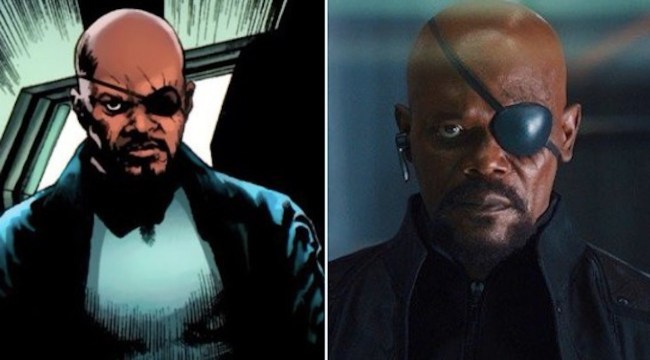 Today — May 4, 2021 — is the nine-year anniversary of ‘The Avengers’, so we’re taking a look back at the history of the Marvel Cinematic Universe.

When you think of the Marvel Cinematic Universe — other than the likes of Robert Downey Jr’s Tony Stark and Chris Evans’ Steve Rogers — there’s arguably no actor/character combo more synonymous with the franchise than Samuel L. Jackson’s Nick Fury.

Jackson’s Nick Fury first made his Marvel Cinematic Universe debut in the post-credit scene of Iron Man, where the famed Director of SHIELD is seen telling Tony Stark about “The Avengers Initiative”. The character would then go on to make his first full-fledged appearance in Iron Man 2, followed by appearances in a handful of MCU films such as Thor, Captain America: The First Avenger, The Avengers, Captain America: The Winter Soldier, Avengers: Age of Ultron, Avengers: Infinity War, Captain Marvel, Avengers: Endgame, and Spider-Man: Far From Home. That’s… quite a lot. As such, Samuel L’s Fury is one of the MCU’s most commonly reoccurring characters. But did you know he’s actually been Nick Fury for much longer than that?

That’s right, Samuel L. Jackson first gave Marvel Comics permission to use his likeness for Nick Fury all the way back in the year 2000, when Marvel launched their Ultimate Marvel Universe in an attempt to re-imagine their various heroes for the 21st century.

Samuel L. Jackson gave Marvel permission to use his likeness for Nick Fury *years* before he was actually cast in the role.

Jackson's version of Fury is from the Ultimate Marvel Universe, created in 2000 to re-imagine the Marvel heroes for the 21st century. pic.twitter.com/TKF37S0ykv

Fury’s Marvel Cinematic Universe involvement certainly isn’t slowing down any time soon, as Samuel L. is set to reprise his role in Disney+’s upcoming series Secret Invasion alongside Ben Mendelsohn, Olivia Coleman, Emilia Clarke, and Kingsley Ben-Adir. While Secret Invasion has no set release date, the series is expected to premiere in 2022.