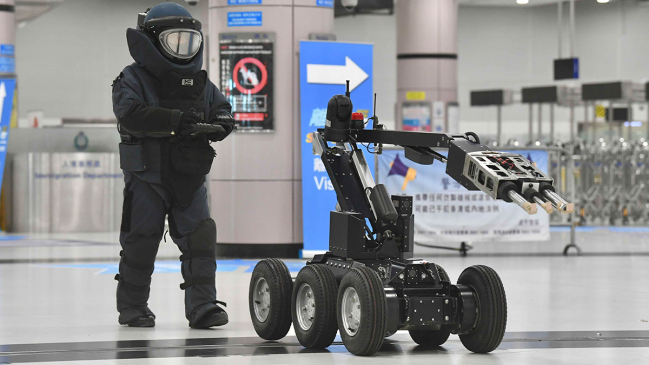 Over the past couple of decades, companies like Boston Dynamics had repeatedly given us a glimpse at the dystopian future humanity appears to be on a crash course with courtesy of the many advancements that have made the concept of a robot uprising (and subsequent apocalypse) increasingly plausible.

There may have once been a time when it would’ve been fairly hyperbolic to suggest a video of a robot “dog” dancing to “Uptown Funk” was really a glimpse at a Black Mirroresque nightmare on the imminent horizon. However, making that kind of leap seems much less dramatic in a world where people are mounting guns on the back of mechanical minions and the Chinese military reportedly has a fleet of armed robots that can be deployed via drone.

As a result, it’s fairly easy to understand why some people aren’t exactly embracing a proposal the San Francisco Police Department is pushing for the city’s Board of Supervisors to approve involving the use of killer robots.

According to Mission Local, multiple members of that board have taken issue with some language in a “Law Enforcement Equipment Policy” the SFPD has drafted ahead of a vote on November 29th, which currently reads:

“Robots will only be used as a deadly force option when risk of loss of life to members of the public or officers are imminent and outweigh any other force option available to SFPD.”

That slippery slope was first traversed by the Dallas Police Department in 2016 after a sniper who was targeting officers from a parking garage was killed following a lengthy standoff that came to an end when a response team detonated a bomb that was strapped to a robot that was dispatched to the culprit’s location.

By now, it’s fairly clear the world is heading in a direction where more and more law enforcement agencies will harness unmanned vehicles and robotic “personnel” to keep real, actual humans out of harm’s way. With that said, you can’t really blame lawmakers in San Francisco for not scrambling over each other to welcome that reality with open arms.