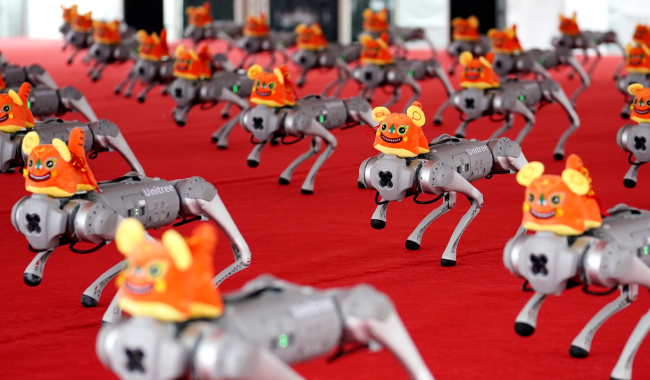 In a completely useless gesture, Boston Dynamics and five other major robot manufacturers pledged to not support the weaponization of their products.

“We believe that adding weapons to robots that are remotely or autonomously operated, widely available to the public, and capable of navigating to previously inaccessible locations where people live and work, raises new risks of harm and serious ethical issues,” the companies stated in a open letter.

Boston Dynamics CEO Robert Playter said in an e-mailed statement to Axios, “We are concerned about recent increases in makeshift efforts by individuals attempting to weaponize commercially available robots… For this technology to be broadly accepted throughout society, the public needs to know they can trust it. And that means we need policy that prohibits bad actors from misusing it.”

A lot of good these promises will do.

Earlier this week, The War Zone shared footage out of China of a Chinese-made drone transporting and dropping off a robot dog armed with a machine gun.

The drone, acting as a robotic dropship of sorts, then lands atop the roof, releases the robodog, and flies away. Shortly thereafter the robodog unfurls from its folded position and begins navigating its new surroundings with what looks to be a Chinese QBB-97 light machine gun (designated as Type 95 LGM in the United States) mounted on its back.

The description of the video, posted to Weibo, loosely translates to: “War dogs descending from the sky, air assault, Red Wing Forward heavy-duty drones deliver combat robot dogs, which can be directly inserted into the weak link behind the enemy to launch a surprise attack or can be placed on the roof of the enemy to occupy the commanding heights to suppress firepower. And ground troops [can] conduct a three-dimensional pincer attack on the enemy in the building.”

The Future is Now. pic.twitter.com/tRKnKa8xvp

Earlier this month, Brig. Gen. Curtis Taylor, the commander of the United States Army’s National Training Center, posted a video of a simulated 40 drone swarm attack on a visiting unit at dawn.

At sunrise this morning a swarm of 40 quadcopters all equipped with cameras, MILES, and lethal munition capable launched in advance of 11th ACR’s attack on a prepared defense by 1AD. Drones will be as important in the first battle of the next war as artillery is today. pic.twitter.com/zPQ2I8SoqN

Back in October of 2021, Ghost Robotics and SWORD International revealed they had created a robot dog with an assault rifle attached to its back. Called the Special Purpose Unmanned Rifle, or SPUR, this robot dog is capable of precision fire at a distance of up to 3,940 feet.

In July of 2020, video of a robot dog with a machine gun demolishing its targets went viral. That video, which appeared to be filmed in Russia, seemed to the byproduct of someone strapping a PP-19 Vityaz on the back of a robot that anyone can purchase from a Chinese company for around $3,000.

The people behind Black Mirror knew exactly what they were doing when they put together the episode “Metalhead.”