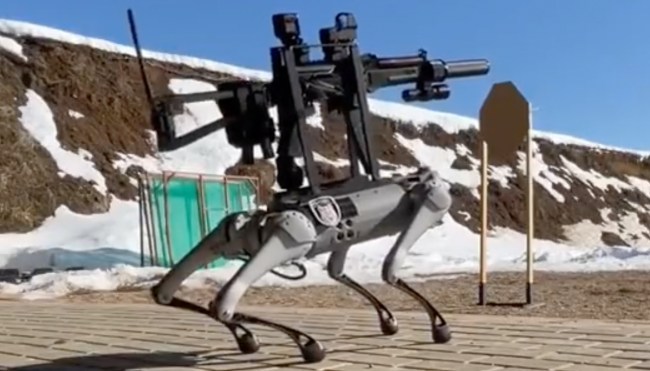 In 2005, Boston Dynamics gave the world its first glimpse at the future when it unveiled BigDog, the four-legged mechanical creature that set the table for the reminders we’ve routinely received since then concerning the robot uprising we seemingly inch closer to every single day.

That includes the gradual evolution of the Spot, the robot dog that was first introduced in 2016 and seemingly served as the inspiration for the army of hostile automatons intent on wiping out any humans who managed to survive the initial A.I.-induced apocalypse depicted in the Black Mirror episode “Metalhead.”

While the company has done what it can to make Spot and its other products seem cute and cuddly, concerns about the direction society may be heading that seemed fairly hyperbolic a few years ago have become increasingly realistic as other companies have gotten in on the action while catering to the police departments and military branches that have begun to deploy them in training exercises and real-world scenarios.

Now, we have some new cause for concern thanks to a video that went viral for reasons that should be evident as soon as you get the chance to watch a robot dog with a machine gun strapped to its back hit a number of different targets with relative ease.

All the people who laughed off the “worrywarts” years ago for freaking out about the Funny Dancing Robot Dogs ™ should be forced to watch this video once a day for the remainder of the year. pic.twitter.com/WBIrlGah3w

As Vice notes, the video appears to have been filmed in Russia earlier this year. Based on their analysts, it seems to be the byproduct of someone who took the time to strap a PP-19 Vityaz on the back of a robot anyone can purchase from a Chinese company for around $3,000 (it’s also likely whoever built it was also manually aiming and operating it).

Of course, the fact that the dog seemed to be the end result of what was essentially an at-home experiment didn’t do much to assuage the fears of many people who assumed it’s only a matter of time until similar beasts are unleashed upon an unsuspecting world.

wow this might be the worst thing i’ve ever seen! https://t.co/ywYurQ3WlY

Any time you see the government building (or commissioning) a thing that can move around you should imagine how they will eventually attach weapons to it. https://t.co/Lhd1HvCkAi

On an entirely unrelated note, here are some potential ways you can disable a robot dog like this one if you ever find yourself in a situation where that kind of knowledge would come in handy.