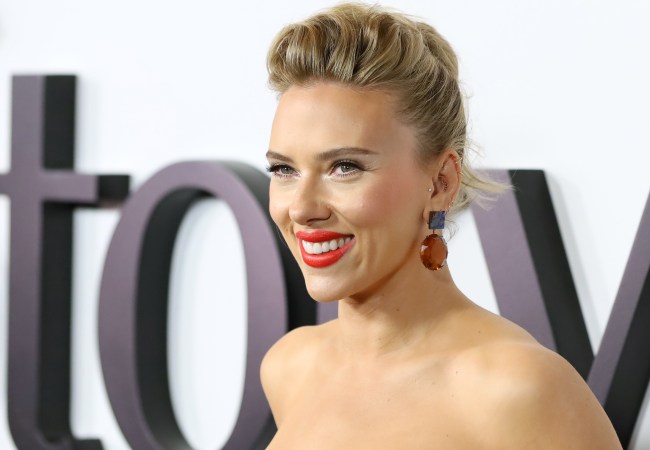 On Tuesday, when the first trailer for Scarlett Johansson’s upcoming standalone Black Widow movie was released, no one was more surprised to see it than Johansson herself.

During her appearance on The Late Show with Stephen Colbert on Thursday, the Marvel star admitted that it wasn’t until she received an early morning text from her Avengers co-star Chris Evans that she found out.

“Nobody told me that it was coming out,” Johansson told Colbert. “I actually woke up and I got a text message from Chris Evans, and he was like, ‘The trailer looks great!’ I don’t know what he was doing up at 5 a.m. That’s a whole other story.” She then pantomimed drinking.

“But yeah, I was also as excited as everybody else,” she continued. “I had no idea it was even coming out. They didn’t even tell me. I don’t know, they keep everything from me.”

Colbert then asked her if Black Widow could take Kylo Ren in a fight? Adam Driver and Johansson star together in a new movie coming out called Marriage Story.

“Is that sort of like a tiger against a lion kind of thing?” Johansson replied.

After Johansson confirmed that the Black Widow film would be “all about” the “red on her ledger” Colbert dropped his fan theory on her that got Johansson so flustered and wound up that she couldn’t even answer whether or not the the key part of it is true: whether or not this will be her last time playing Natasha.

Yeah, that was my reaction too, Scarlett.

Check out the entire fun and fascinating interview below…