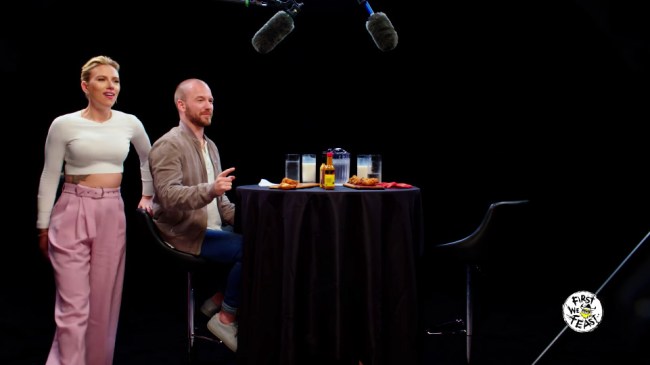 Scarlett Johansson, however, might just be the biggest star of them all to struggle with the “Hot Ones” challenge.

And struggle she did, almost spoiling something very important that happens in Marvel’s upcoming blockbuster flick Avengers: Endgame.

This is how she spent a majority of the episode…

Johansson literally had to take a lap at one point and resorted to using some “lifelines” of bread, rice and beer to cope with the heat.

As for the discussions that took place as she suffered, Johansson talked about things like voicing Princess Mindy in The SpongeBob SquarePants Movie, the best movie-set food, Meryl Streep’s love of the movie Lucy, whether Captain America will die in Endgame (stop watching at 23:00 if you don’t want any kind of clue should she actually be giving one, which is debateable), and learns that a meme and GIF are not the same thing. Seriously.

Unrelated, but related, Johansson also joined some her fellow superhero actors at a Avengers: Endgame UK fan event on Wednesday and I am just going to leave this here… no reason…