Shaquille O’Neal Went On ‘Hot Ones’, Burned The Sh*t Outta His Mouth, And Told The Best Prank He’s Pulled On Charles Barkley 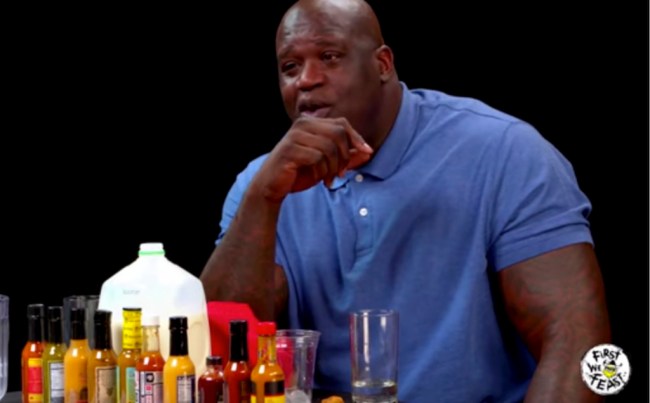 Given the fact that Shaquille O’Neal is a monster of a man who looks like he can eat anything he wants to without repercussions, it’s pretty great seeing him wipe away tears as he continues to eat some of the hottest sauces on the planet. While The Diesel holds his own pretty well, there are some solid moments when you think he might just show his lunch. Sadly, he didn’t do such a thing — it would’ve made for great television had he, though.

One thing Shaq did do while on Hot Ones was tell a superb story about his best prank on fellow TNT analyst Charles Barkley, who O’Neal is often bickering with as if the two were a married couple arguing over what cuisine they should have for dinner. And, while Shaquille O’Neal and Barkley together are hilarious, the best prank Shaq once pulled on Sir Charles is even better. Take a listen below, via Tyler Conway of Bleacher Report’s Twitter account.

I'm DYING at Shaq crying on Hot Ones 😂😂😂😂 pic.twitter.com/IdK4ucCXGk

To paraphrase Shaquille O’Neal, here’s how he described the wild Barkley prank, via UPROXX:

“Charles doesn’t like to wear underwear,” Shaq said. “So one time we put some extra lotion and Vaseline inside his slacks. When he pulled them up, it felt wet down there.”

Man, that’s some good stuff right there, Shaq. It’s sort of like how we used to put a bunch of Gold Bond in the boxers of freshman while they were showering after soccer practice, leaving them with a burning sensation the second they pulled their undies up. Bathroom pranks will never go out of style, in my opinion.

Considering Charles Barkley also recently said he wants to retire from being on TV before he’s “sh*tting and pissing” himself makes this Shaquille O’Neal prank that much better. Imagine Barkley’s reaction when he put those trousers on; for a second, he probably thought that day had come.

The entire Hot Ones episode with O’Neal is pure gold, so you can watch it below for some more laughs and info on the big fella. There aren’t many people more entertaining than Shaq, so it’s worth watching.

Not sure why it took Shaquille O’Neal so long to get on this how, but, damn, we’re glad he didn’t keep things PC once he finally did. Hopefully he downed gallons of milk to cool down his mouth afterwards, too, because he was looking pretty rough throughout the entire episode.