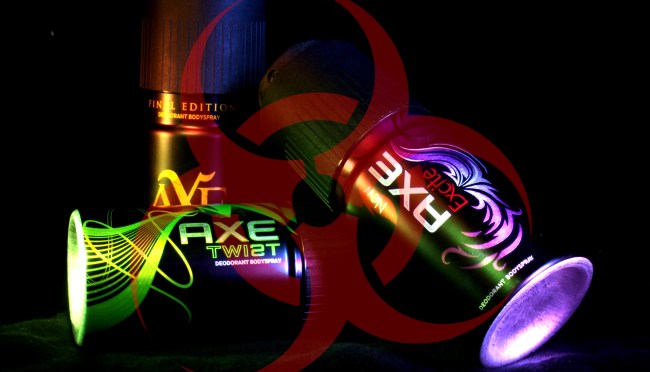 30 students from the Buffalo Creek Middle School in Parrish, Florida (of course, Florida), were forced to evacuate the school bus they were riding on after the driver reported to his dipatch that he had a “hazardous materials incident” on his hands.

The driver’s call prompted his dispatch to contact 911, which led to the rushing the local fire department and emergency medical services to the scene where the driver had pulled the bus over after numerous students complained about a “strong odor” causing “mild respiratory irritation.”

The source of the terrifying smell? Axe Body Spray.

According to a statement by the Parrish Fire District, who responded to the call, 15 students were treated at the scene, a secondary bus was called in, and the students were transported to a designated pick-up location for parents to retrieve them. Because of some Axe Body Spray.

When none of the students confessed to being guilty of being the stinker, Parrish Fire District Division Chief Mike Williamson proceeded to interview each kid personally.

“Once I got down the line, I was able to determine it,” Williamson told TODAY. “Before I could even tell (one student) what I was looking for, I made a motion like I was spraying, and he handed me an empty bottle of the black Axe Body Spray. I could smell it all over him.”

Bruh… an empty bottle?? No wonder they had to evacuate.

“We had heard reports from other community members that it’s somehow a thing with kids spraying it all over each other to smell nice or prank each other,” Williamson added. “They must have watched a lot of episodes of Band of Brothers because they would not say who did it.”

The school would not confirm if Axe Body Spray was the reason for the bus evacuation, but Williamson said there were no hazardous materials found on board and yo, there was that empty bottle of Axe Body Spray in that kid’s backpack, so you do the math.

“I never say I’ve seen it all because the minute I say that, something else has to top it,” said Williamson.

The “incident” is still under investigation.