Why Do Dogs Like To Sniff People’s Crotches? A Doctor Explains The Strange Behavior 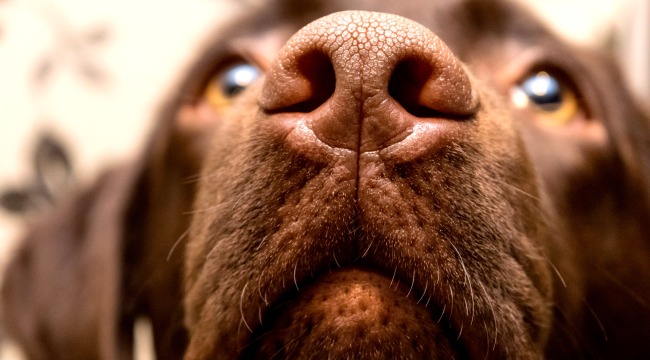 Ah, the age-old question, asked by millions upon millions of bewildered humans. Why is that dog sniffing my crotch?

Well, the answer to that oft-asked question lies in, you guessed it, SCIENCE!

According to a National Health Service (NHS) doctor, Dr. Karan Raj, in a video he posted to TikTok (because that’s where all get our medical news and education now), sniffing a person’s crotch is actually something that we humans used to do way back in the days before such a thing was frowned upon by society.

“OUR ANCESTORS WERE DOING WHAT?” wrote TikToker kaylena, scoring the to comment on the video.

“Dogs have an organ used to detect pheromones called the Vomeronasal organ,” Dr. Raj continued. “We actually have it as well but we’ve evolved to the point where it doesn’t work anymore.”

“Are we sure it doesn’t work anymore?” asked TikToker Tyler.

“Pretty sure,” replied the doctor.

“We have loads of apocrine glands (or sweat glands) in our armpits and groins,” Dr. Raj adds. “The glands release pheromones which carry information about age, gender, mood, if you’ve just had sex, if you’re menstruating. So when a dog smells your groin, it’s just trying to get to know you.”

So there you have it. The answer to the question, which, based on the fact that the good doctor’s TikTok video has been viewed around one million times, many people were very eager to learn.

Now, if we can only get all of the dogs of the world to watch this video I think we might really be on to something.