A History Of ‘We Live In A Society’ 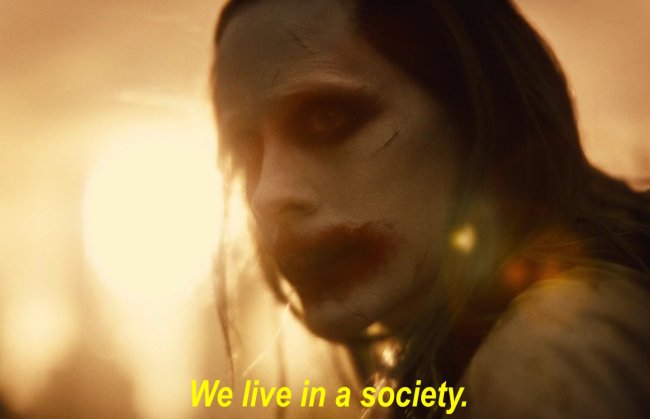 Depending on your perspective, Batman v. Superman: Dawn of Justice director Zack Snyder is either a brilliant or a criminal troll. There’s no in-between. You’re either in on the joke, or you’re not.

That point of opinion likely dictates how you felt about the official trailer for Zack Snyder’s Justice League, which, among many other things, included Jared Leto’s Joker delivering the ironically iconic “we live in a society” line.

Personally, while I certainly appreciate Snyder’s commitment to the Troll Game, I lowkey found the moment to be borderline… offensive? The Snyder Cut is a result of one thing: the passion of the fans. It’s taken literal years of organizing and campaigning and hashtagging to get this project off the ground, and now that it’s finally happened, Snyder repays the fandom by reintroducing an already-much-maligned character to have him simply… troll us? Granted, Leto’s involvement as a post-apocalyptic Clown Prince of Crime may delve far deeper than a simple line-reading, but as far as first impressions go, the “we live in a society” moment struck the wrong chord with me.

But where, exactly, did the “we live in a society” quote come from? Like most memes on the interest, its origin is far more complicated than it seems.

While the phrase itself can be pinpointed back to the 1990s — specifically, George Costanza yelling “You know, we’re living in a society!” in the iconic “Chinese Restaurant” episode of Seinfeld — its intersection with Joker didn’t come to pass until a few years ago.

As for the meme iteration, its earliest existence can be traced back to an April 2015 post on the Hong Kong meme website 9gag, which included an image of the Joker and the caption: “When the nice guy loses his patiance (sic) / The Devil shivers.” Over the next three years, the post would go on to accrue over 38,600 “points” and 520 comments. 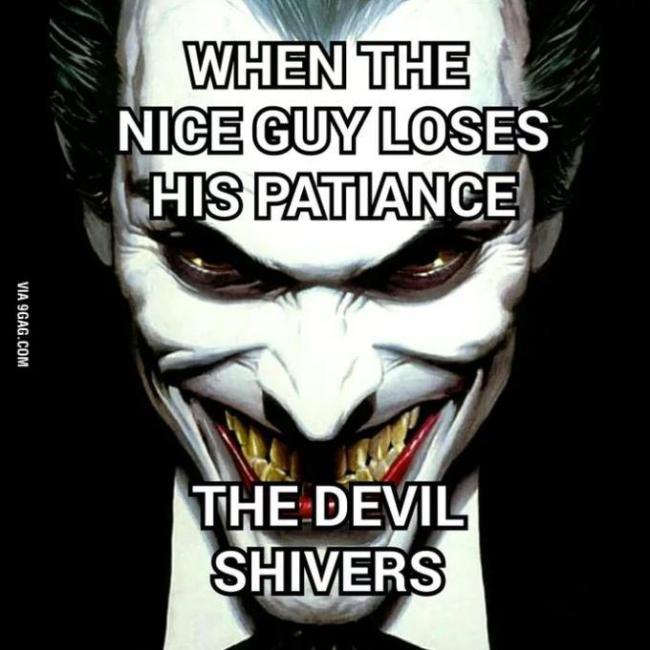 As the line began to spread throughout internet culture, a Change.org petition popped up in 2018 that implored the Joker filmmakers to have the eventually-Academy-Award-winning Joaquin Phoenix say the line in the film.

“We all know about the Joker’s way of thinking and his philosophy. He’s intelligent, nihilistic, and with a wicked sense of humor. And his views on society speak large about his character, and I believe so, as many of you do, that if we add this line in the movie, it’ll make it significantly better and will show more depth in the twisted mind of the Joker,” the tongue-in-cheek petition reasons.

“What I have in mind is a scene where the Joker sees a kid in a restaurant playing Fortnite on his phone while his grandfather is reading a book (insert book title here). And he looks at them and says “damn, we live in a society”. He may say this line as he looks into the camera thus breaking the 4th wall.”

From there, the meme became part of the zeitgeist, as it began to infiltrate aspects of mainstream culture that are entirely unassociated with Batman or Joker:

Kanye: we live in a society

We need a President who recognizes that we live in a Society.

Then, on Sunday, February 14 — similar to Pinocchio finally becoming a real boy — “we live in a society” was ushered into comic book canon as Leto’s Knightmare Joker uttered the legendary phrase to Ben Affleck’s warn-torn Batman: “We live in a society where honor is a distant memory. Isn’t that right, Batman?”

Naturally, the internet absolutely lost their minds, as even Leto himself appears to be in on the joke:

We live in a society https://t.co/3OaJxZlfOy

The Joker actually saying the words “we live in a society” in a movie pic.twitter.com/tCZNhd3aXZ

The Joker finally said the iconic we live in a society meme in a film before Yandere Sim finished development. pic.twitter.com/hlhGrO4jdX

— Things That Have Happened Before Yandere Simulator (@BeforeYandere) February 14, 2021

When Jared Leto’s joker finally gives us the “we live in a society” that we’ve all been yearning for #SnyderCut pic.twitter.com/HiMZWP6vmc

"now tell him that we live in a society" pic.twitter.com/zwpt1eNoAx

me being forced to give kudos to Snyder for having the Joker drop "we live in a society" pic.twitter.com/GkCDGTLVra

Jared Leto's much-maligned Joker finally reappearing to do nothing but troll us#SnyderCut pic.twitter.com/pTLJJ5Vpty

The Snyder Cut will enter society when it hits HBO Max on Thursday, March 18.