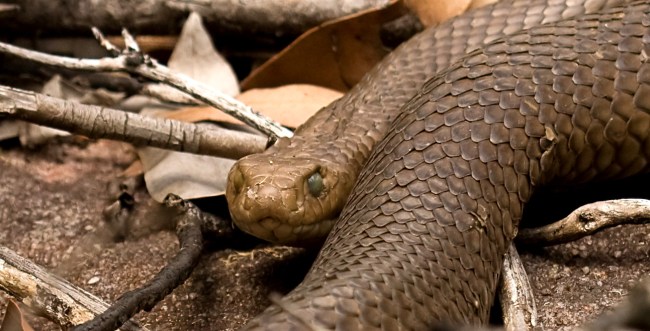 Scientists recently discovered, by accident, a previously unknown way snakes can climb things like poles and trees. They turn their bodies into something like a lasso and shimmy their way up.

As if it wasn’t bad enough that we learned recently that snakes can fly, now there’s this? I may never leave the house again.

Researchers from Colorado State University and the University of Cincinnati came across this discovery as they were developing safe nesting sites for native birds in Guam.

The nesting sites were placed at the top of a smooth vertical pole, ostensibly to keep predators from being able to climb up to the nests.

Unfortunately, some snakes, whose previous known modes of locomotion – sidewinding, rectilinear, lateral undulation, and concertina – didn’t get the memo.

These brown tree snakes were filmed using something the scientists dubbed “lasso locomotion” – wrapped themselves around the pole like a lasso and inching their way upwards.

“We didn’t expect that the brown tree snake would be able to find a way around the baffle,” said study co-author Thomas Seibert. “Initially, the baffle did work, for the most part. Martin Kastner, a CSU biologist, and I had watched about four hours of video and then all of a sudden, we saw this snake form what looked like a lasso around the cylinder and wiggle its body up. We watched that part of the video about 15 times. It was a shocker. Nothing I’d ever seen compares to it.”

Not that it’s easy. Co-author Bruce Jayne points out that the snakes they observed were struggling, often slipping and stopping to catch their breath.

“Even though they can climb using this mode, it is pushing them to the limits,” said Jayne.

“The loop of the ‘lasso’ squeezes the cylinder to generate friction and prevent slipping,” Jayne told Gizmodo in an email. “The little sideways bends within the loop of the lasso serve two important functions. First, they provide a mechanism for tightening the loop by using the largest groups of muscles within the body of the snake, and second, they move the snake upward bit by bit as they move toward the tail of the snake and around the circumference of the cylinder.”

He added, “To date, I am not aware of anything remotely similar to the lasso locomotion of brown tree snakes in other species.”

Video of these creatures in action is straight-up nightmare fuel.