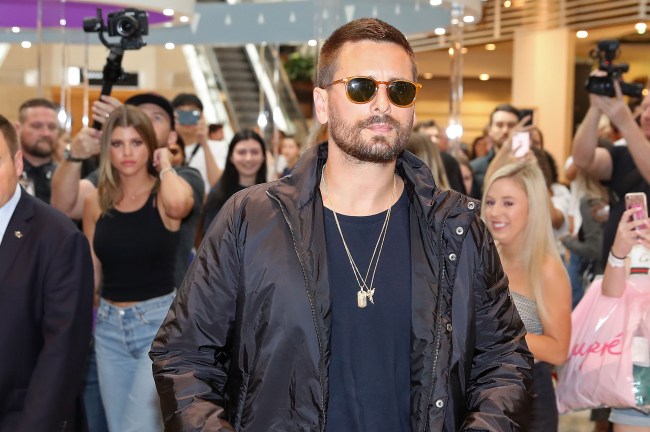 Scott Disick is a pretty successful man. He has a net worth that’s estimated somewhere in the range of $20 million and he is believed to earn around $4 million a year which is remarkable because I think most people couldn’t tell you a single thing he’s done outside of reality TV.

Lord Disick is probably best known for previously being married to Kourtney Kardashian. The two were married from 2006-2015 and have three kids together.

I wanted to call this badass California property that’s inspired by The Hamptons a ‘bachelor pad’ but that just didn’t seem right given that Scott’s a father of three. Scott Disick was born in Eastport, New York which is just a stone’s throw away from Westhampton so the fact that this awesome house was inspired by the architecture of The Hamptons shouldn’t come as a surprise at all.

Scott opened up his home to Architectural Digest and gave a tour of his California pad with a first-floor wine cellar, infinity pool, and an exquisite car collection that any man would be jealous of. Lord Disick says he’s had a love of cars his entire life and has always been a collector of some sort. Now he has the money to back that collection up.

On this tour of his home, Scott shows off his 812 Ferrari, a classic Shelby Cobra, a Rolls-Royce Don convertible and more. Life is good if you’re Scott Disick, apparently, and this tour of his awesome house is all the proof you’ll need to see that.

Scott has a new reality TV series titled Flip It Like Disick on E! which gives fans a look into his life as a celebrity and a glimpse into how he flips high-end properties. So I guess it would make perfect sense that Scott opened up his home to Architectural Digest for this tour given his new endeavor.

Here’s an excerpt from the AD article on why Scott chose this home in particular:

Inside, this warm yet pared-back sensibility has more than enough space to shine. There’s nothing cluttered about the expansive pad—even chandeliers felt superfluous and were nixed. “I was looking for something that felt very East Coast,” says the native New Yorker. “I always pictured myself in a kind of Hamptons-feeling house, but updated.” The true selling point, however, was the winning combination of large lot, privacy, and view: a rare one in Hidden Hills, overlooking city lights.

Though the white clapboard home was a mostly finished new build when he took ownership, Disick made significant changes to the hardware, mirrors, lighting, bathrooms, and floors. He also replaced the basic wooden front door with an oversized one in glass and metal. “I like it to be as minimal as possible but still comfortable,” says the TV personality of his preference for stark interiors. “I have more art, but I had to take it off the walls because it was too much,” he adds of the tight edit. (On his wish list is a Jean-Michel Basquiat, “but I can’t really afford it.”)

It’s obvious that he’s a man with taste but that’s something we’ve always known. As a guy who has inhabited a world of Reality TV that’s often full of new money, he’s always been somewhat of an outsider in appearance, a guy who plays that role of ‘act like you’ve been there before’.

Will I watch his new show? Doubtful. I’m fortunate enough to have never watched more than 5 or 10 minutes of KUWTK in my entire life despite that show being on its like 500th season. But He is definitely more compelling that most reality TV characters because there appears to be some substance behind the camera.

Want to check out more badass real estate? This $75 million Lake Tahoe mansion has 13 fireplaces. This $56 million Bel-Air mansion is one of the greatest SoCal homes around. And this $35 million Malibu home has two private beaches.