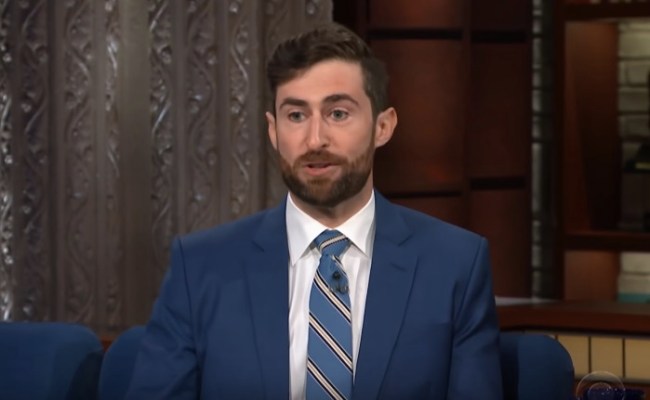 Scott Rogowsky was a comedian trying to break into the business for 12 and a half years before HQ Trivia took off. If you clicked on this article about Scott Rogowsky I’m guessing you already know that HQ Trivia is the live mobile trivia game that runs twice a day (usually 3pm and 9pm but it’s 8pm and 9pm this week). They’ve given away a minimum of $5,000 per game and during the NBA Finals they gave away $400,000 is one game.

I’ve all but sworn off HQ Trivia from my life because I’ve made it to the 11th question on three separate occasions and have choked every time down the stretch, I also got a shout out one night and Scott (@scottrogowsky) butchered my name, but there are still well over a million players logging in on Sunday nights to try and win a piece of that pie. As a guest on The Late Show With Stephen Colbert last night, Scott Rogowsky talked about how quickly his life changed thanks to HQ Trivia, how he was forced to buy a mattress back from his roommate after he tried to sell it on Craigslist, and then Scott threw some quiz action at Stephen Colbert:

By the way, if you ever get the chance to go see Stephen Colbert in person you should really jump on that opportunity. I saw him in NYC when he was still hosting The Colbert Report on Comedy Central but Stephen took a solid 15-20 minutes before they started filming to answer any questions thrown at him from the audience. It was sort of a way for him to warm up and get sharp, and it was remarkable to see how quick of a mind Stephen has when he’s firing on all cylinders.

By the way, here’s how you can score an extra life on HQ Trivia once a week without ever having to share your code with friends.