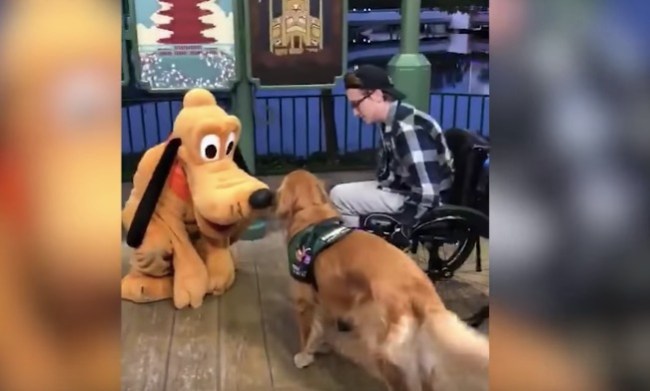 Dogs are the best. This is a fact. I could spend all day listing the ways which dogs are the absolute fucking best but that’d be cumbersome because you already know how awesome dogs are. Instead, I’ll hone in on one specific good dog.

Atlas is a service dog for 22-year-old Julian Gavino. Atlas goes through life with a stuffed animal of Pluto from Walt Disney which his owner told ABC News he ‘loves so much’. Pluto is Atlas’ best friend even though they’d never met (until recently).

At a recent trip to Disney World, Atlas got to meet Pluto in real life and their friendship was taken to the next level. You might think that Atlas wouldn’t get overly excited about meeting a life-sized version of his favorite stuffed animal, that he wouldn’t recognize a blown up version of his toy, but you’d be wrong. Atlas spotted Pluto and Pluto spotted Atlas. It was love at first sight:

And here’s Julian with his service dog Atlas at Disney World:

Everything about this has made my day. If I would start every day by watching videos like this I think 2018 could be the best year of my life. And I’m pretty sure your life would also be greatly enhanced by this morning ritual as well.